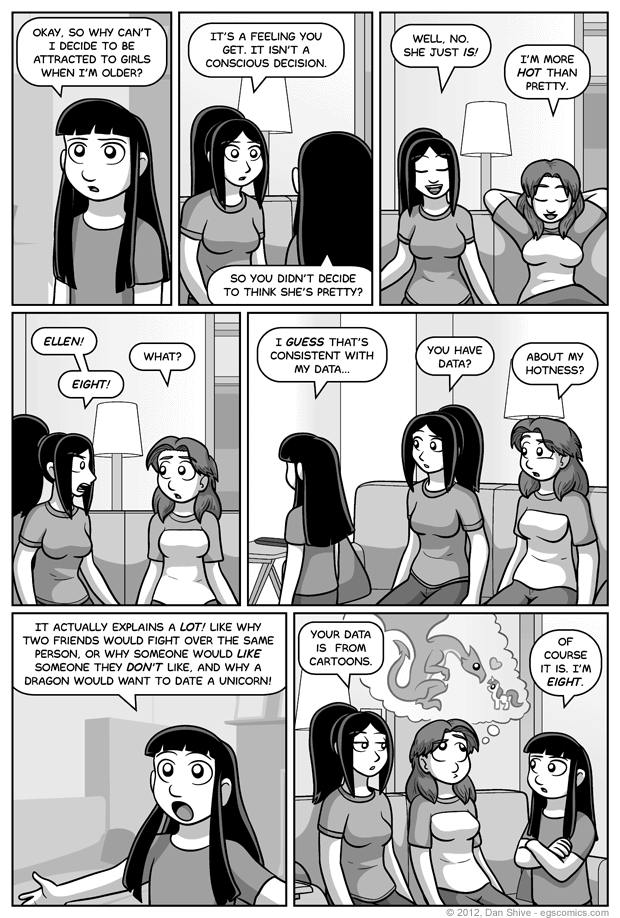 Okay, clearly I know of ponies, and this comic references an actual character dynamic from My Little Pony: Friendship Is Magic involving a dragon who is in love with a unicorn. The dragon in question is actually smaller than the unicorn, however, because he's a baby dragon! Wait, does that add up to it being more or less disturbing? Oh, whatever. It's a kid's show. Nothing truly disturbing will ever directly result from it.

An alternate sketched version of the second to last panel is destined for the sketchbook, as I originally tried in vain to squeeze in visual cartoon examples of everything Akiko was listing in that panel. There are so many reasons that was a bad idea, but I did sketch it, so by golly, its day in the sketchbook will come.

I mentioned watching the first Twilight movie in the previous comic's commentary in search of good karma after having mocked the series based on other people's reviews of it without having seen or read it myself. Although, to be fair, I have listened to some very, VERY in-depth reviews of those movies.

This has resulted in several people contacting me and telling me either a) to read the book instead or b) to not bother with anything Twilight whatsoever. In the case of the latter, some people were inclined to direct me to excerpts from the books and now I'm actually sort of tempted to try reading the first book.

Now, I don't want to insult anyone who genuinely likes the series, but the reason I'm tempted to is because I found the excerpts funny. I sincerely doubt they were meant to be funny, but it read sort of like a parody to me. A parody that is written as though it's taking itself completely seriously, but is totally in on its own joke. That interests me, even if it wasn't the author's intent.

I haven't decided if I'm going to go so far as to acquire the book and actually read it, but it might happen. I might read Twilight. Is that worthy of dramatic thunder? Probably not, but I'm gonna do it anyway.