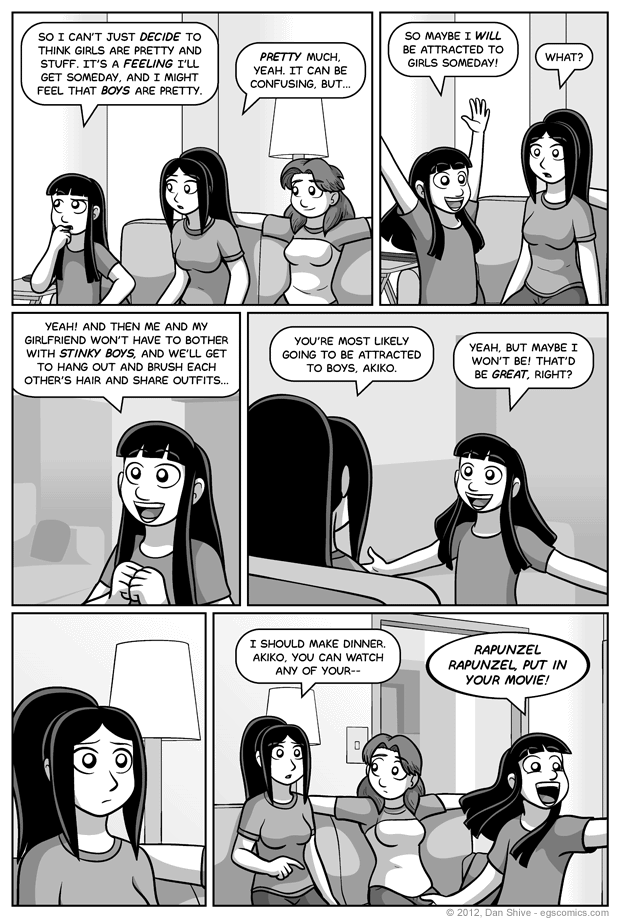 I'm willing to bet Akiko has all the songs from Tangled memorized. This surely is not at all similar to how I was with certain Disney movies.

One likely did not need the help of this storyline to reach the conclusion that I do not consider homosexual attraction to be a choice. Personally, I find it odd that anyone would consider it to be a choice, as attraction in general doesn't work that way. If physical attraction was a conscious decision, life would be a lot simpler. For just one of many examples, cleavage would be significantly less powerful.

This is the sort of thing that makes me wonder, however, whether everyone who claims "homosexuality is a choice" is saying what they are commonly interpreted as saying. What I am saying is that the ATTRACTION is not a choice. I sometimes wonder if some people are only referring to actually ACTING on that attraction as being the choice. If that were the case, then technically, yes, that's a choice. Acting or not acting on any attraction would be a choice.

Of course, I feel the choice to act on an attraction shared by consenting adults is nobody's business but their own and it should be perfectly acceptable, but my point is that I'm simply not sure if everyone's actually arguing about what they think they're arguing about.

I know with a fair amount of certainty, however, that there are plenty of people who are genuinely arguing that the attraction itself is a choice. Once during a debate in a college business psychology class (because god forbid we discuss the actual course material), someone made the claim that it was just the appeal of the lifestyle that made people gay. The argument basically boiled down to it not being based at all in naturally occurring physical attraction, but in the gay party scene being just that awesome.

As much as the whole "homophobes are actually gay themselves" argument is more based on people enjoying irony than solid data, I can't help but hear an argument like that and think that, if it makes sense to them, they've gotta be at least bi-curious.