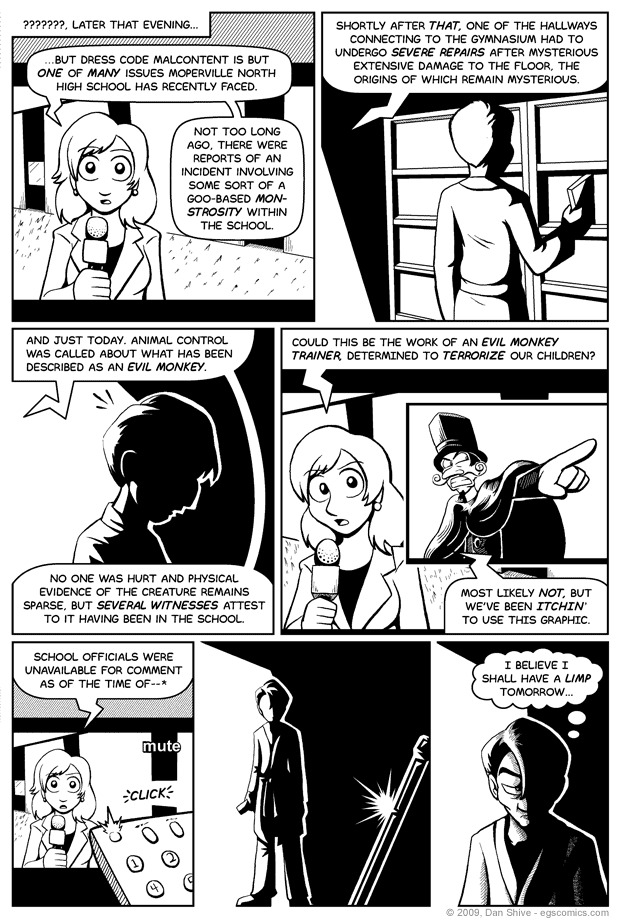 Clearly, Raven has something on his mind after hearing something about evil monkeys. Is he strongly opposed to furry evil simians? Only time will tell.

I enjoy working with black and white, and this is a comic where I got to have some fun with obscuring Raven. I was originally going to have him entirely in silhouette and not confirm at all until later that this was him, but I realized that there are enough mysteries at the moment and I would miss out on possible jokes later if I had to keep his identity here a secret. Not only that, but Raven has a distinct silhouette, and I'd have to cheat the heck out of it to keep his identity a secret.

The whole evil monkey trainer bit is something I've been itchin' to include. The bloodgrem's physical form was based off of monkeys so it could be animal-like with human characteristics, and I needed people to refer to it as an animal, so it was very organic for it to eventually be referred to as an evil monkey. The TV show Family Guy has its own evil monkey who points menacingly, and while the bloodgrem in general is not intended as a reference to that, this particular joke is.

I started to overthink things during the production of this page, such as the layout of the room where Raven is. Really, it's not that important. There's a TV and a shelf with books, DVDs, or whatever he's putting away there. That's all that's needed for this scene, yet I started designing the whole dang room. That might be a good idea eventually, but for now? A waste of time.