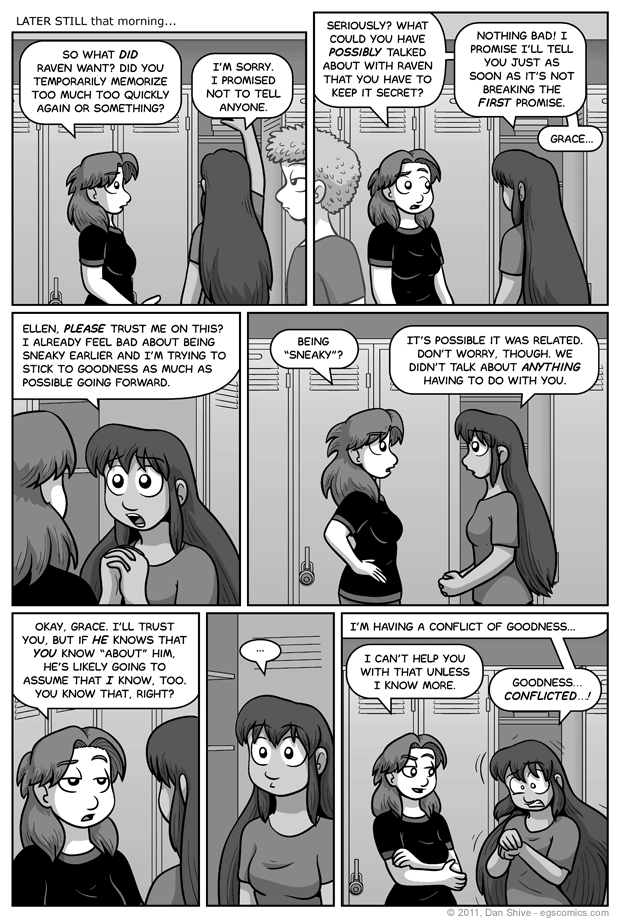 Posted December 5, 2011 at 1:00 am
- Memorize too quickly
- Temporarily memorize, that is
- Sneaky ultra ninja squirrel Grace (possibly with lasers (lasers not included))

Alignment violation! You are penalized with... um... hm. You know, I've read a lot about Dungeons & Dragons, but I have no idea what happens when you violate your alignment and aren't like a cleric or something. Does the DM have to glare at you or something? How long they have to glare probably varies by edition.

Come to think of it, I'm not even sure if Grace's eavesdropping would even count. I'm pretty sure she'd be Chaotic Good. One of you nerds get back to me on that.

More secrets, more problems, am I right? It's like, you think your secret is yours to share, but revealing yourself implies implication of other people, and by the time you realize that's the case, it's too late, and you're not sure if they'll squeal, so you have to lure them into the woods under the pretense of a woodsy slumber party and frame a surly old bear for the impending carnage because, frankly, that bear was a jerk and probably deserved worse than that.

I'm sorry, what were we talking about? A comic, right? Um... lockers are an annoying background to work with, even when reusable, but this was the best place I could think of for this and various other school talky scenes when it's not the entire gang together chatting.

It's not really plot relevant, so I don't bother specifying in the comic itself, but if I HAD to choose EXACTLY when this scene was taking place, it'd be right before their lunch period. That's really not important, but I want all those nerds to tell me what alignment Grace would be in D&D and they feast upon random trivia.