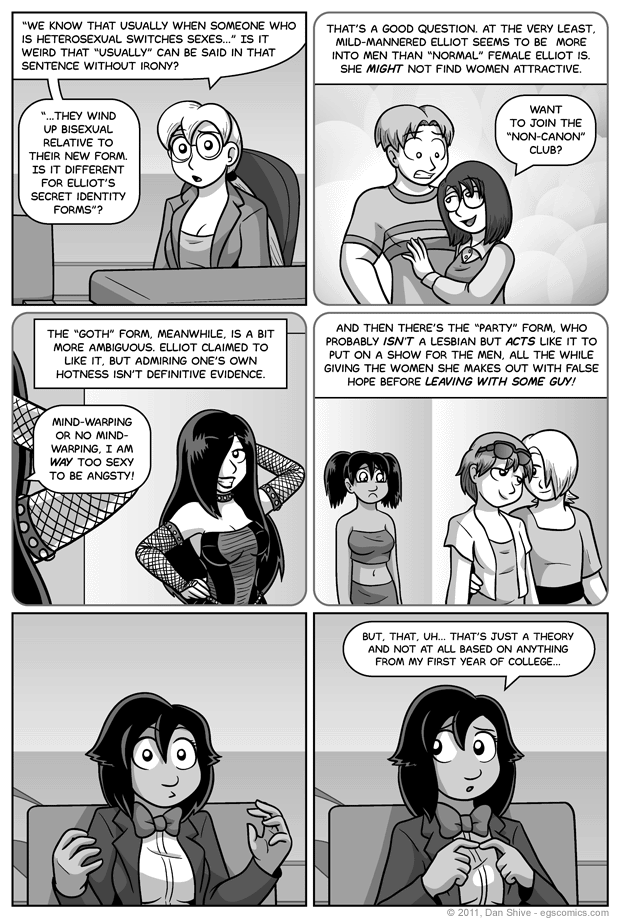 It wouldn't surprise me if some variant (or variants) of the "join the 'non-canon' club" line has already been done in this day and age of rampant meta humor, but I like it. Of course, assuming one counts fan fiction, they might already be in that "club", but I avoid reading fan fiction of my own comics and will hopefully never know.

I know this is less a definitive answer and more a "what has been established thus far" summary, but even I'm not 100% certain at this point. I may or may not be certain for one or more of the forms, but overall, we may or may not ultimately find out together.

The scenario Lisa puts forth is inspired by my knowing for a fact that some women will pose with other women at parties to get the attention of men. Evidence suggests that this is particularly true if a camera is present and someone involved has a Facebook account. While I have never witnessed or heard of a scenario where one of the women wasn't just putting on a show while the other was, I can't help but think that it's happened.

As such, party ladies, I want you to consider the sad Lisa face in panel four the next time you're at a party. I assume this applies to a large percentage of my readership. At least a small percentage? One of you? Maybe?

Oh, whatever. This meets my public service announcement quota either way.