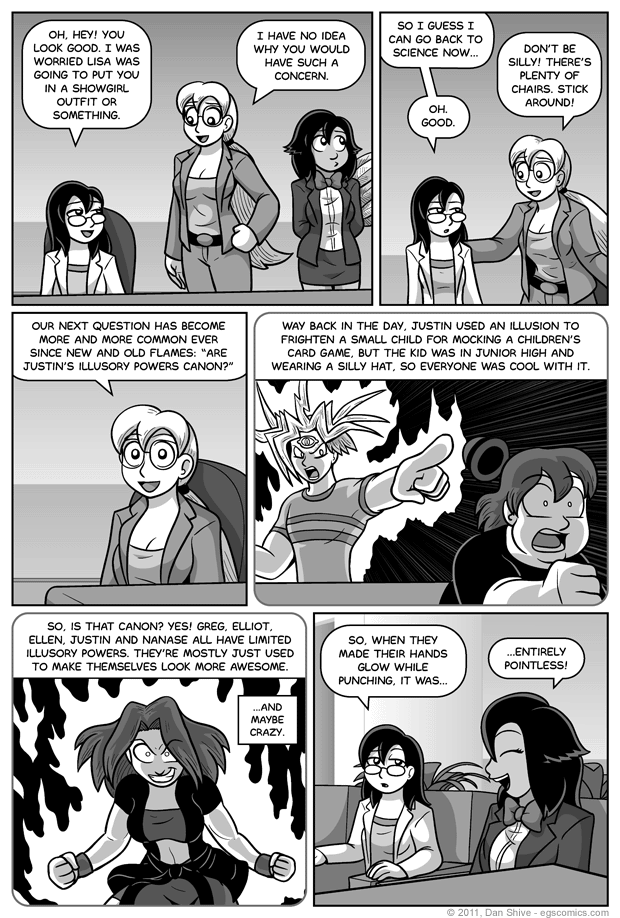 Chika would probably solve every scientific inquiry ever had by humanity if she wasn't contractually obligated to help answer questions about a ridiculously convoluted comic written by a madman.

So, yes, the illusory powers are canon. They just haven't had any reason to use them as of late. In fact, they've had good reasons not to use them. This is especially true when one considers that, as this comic says, the glowing doesn't actually accomplish anything useful and it's pretty much evidence that Greg was their trainer.

I actually did consider having Lisa dress Amanda in something contrary to Chika's instructions, but I decided to have Lisa actually do right by Amanda. As... "playful" as Lisa can be, she is supposed to be Amanda's friend, after all.

Also, I apparently have a rule about long hair, dating and ponytail fashion.

The original comic, and this one, references Yu-Gi-Oh!. The series is fairly ridiculous, though not without its charm. Some of the early stories in the Yu-Gi-Oh comics are actually pretty darn freaky, and had more to do with horror than card games. If memory serves, the first one had to do with a game involving a knife, piles of money stacked on their hands, stabbing at said piles of money (while still on their hands), and the loser being driven temporarily insane. If memory continues to serve, that "temporary" part was only made apparent later.