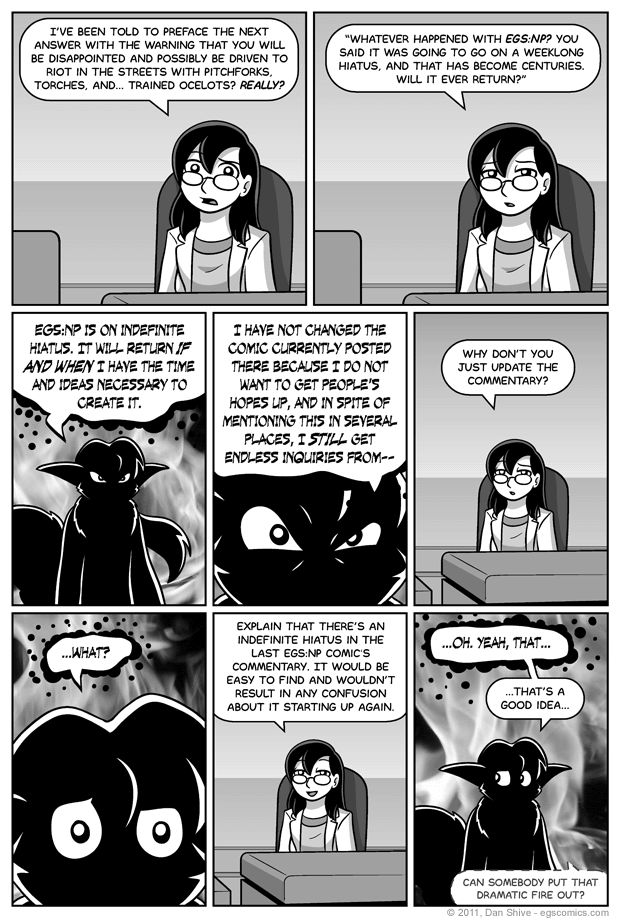 Posted July 19, 2011 at 1:00 am
- The infamous Gods of Curling comic (with updated commentary)
- The beginning of the last run of EGS:NP comics
- So long as I'm linking stuff, the first EGS:NP

Before I get to the rest of the commentary, I just thought I'd mention that I'm on Google+ now. Not sure what exactly I'll use it for, but hey, I'm there.

The fire "effect" is actually just three photos of fire in a fire place that I took back in 2007. It would be four, but so little of the fire is visible in fourth panel that I just reused the fire from the last panel.

This is mostly old news for people who have followed me on Twitter for a while, a few people who have e-mailed me, possibly there's a forum post somewhere, maybe a news post, whatever. Point is, I didn't make news regarding the actual state of EGS:NP easy to find, and while I have my reasons for not changing the last comic posted (as mentioned in the above comic), I had made the easiest information to find an inaccurate and perpetual "one week from now" message.

Questions regarding EGS:NP were totally fair in light of this, although some readers who asked about it weren't exactly... tactful. I have no one to blame but myself for receiving those questions in the first place, but after having answered the question so many times in so many different places, it had become a frustrating question to receive.

As I said, however, I have no one to blame but myself, hence the poking fun at myself here. I really can't imagine why I didn't update the commentary for that comic sooner, but it really is the best solution.

As for a more thorough answer regarding EGS:NP, coming up with ideas for it usually isn't that hard. HAVING to come up with ideas while simultaneously doing the main story, however, gets a bit tricky, and for the time being, I don't have time to pull it off. If I ever have a cache of non-topical (can be posted whenever) EGS:NPs made, I'll bring it back on a trial basis, but don't expect that any time soon.

You may riot when ready. Kevin's got pitchforks and torches handy, but you're on your own if you want ocelots.