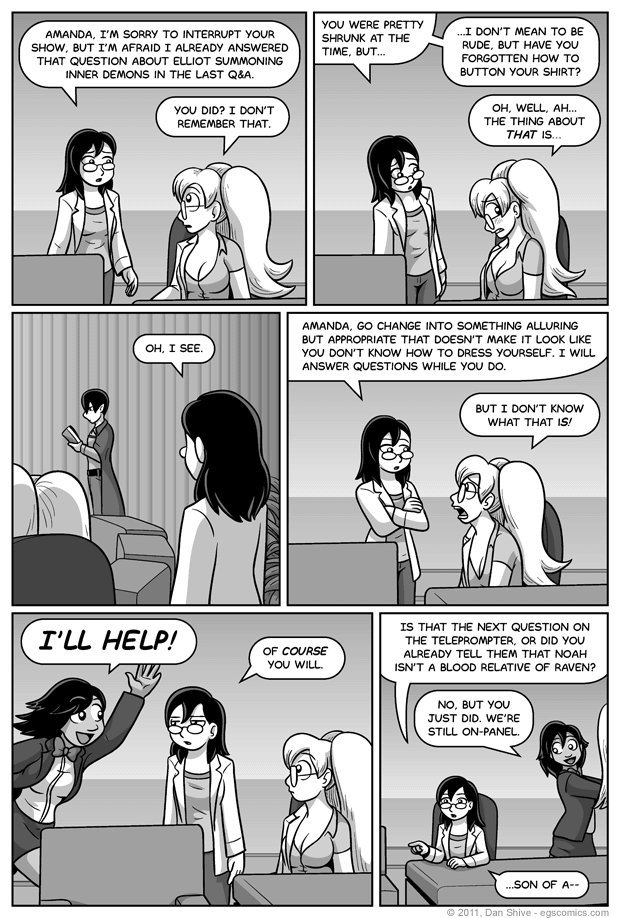 
Anyone who was hoping Chika would show up at some point during this Q&A should be happy that I screwed up last Friday, as I didn't really have an "in" for her during this Q&A prior to that mess up. With Raven already present as the ultimate straight man and Lisa as co-host, there just didn't seem to be much for her to do. And now, THERE IS! All five of her fans will be thrilled.

I've received several variations of "is Noah related to ____" questions, most of which can effectively be answered by saying Noah's not a blood relative of Raven. Some might consider that a spoiler, but it's not a factoid I've been trying to hide. Noah specifically stated his parents aren't alive, and I'd like to think that Raven would refer to Noah as his nephew or whatever if they were blood relatives as opposed to just "I'm his guardian". Granted, he might do something like that while speaking out loud, but he was thinking when he, er, thought that.

Let's just hope it's not Twilight

I don't know what book Raven is reading in panel three. I think it's safe to assume it's a novel at some point, but the drawing was too small to include a visible title, so your guess is as good as mine. I'd like to think, however, that he's reading a Harry Potter book in order to learn teaching tips from Snape.

Or, at the very least, figure out why Snape very specifically has facial hair in the books, but not in the movies. Can't pull of a beard, Alan Rickman?! Eh, whatever. He looks better without it.