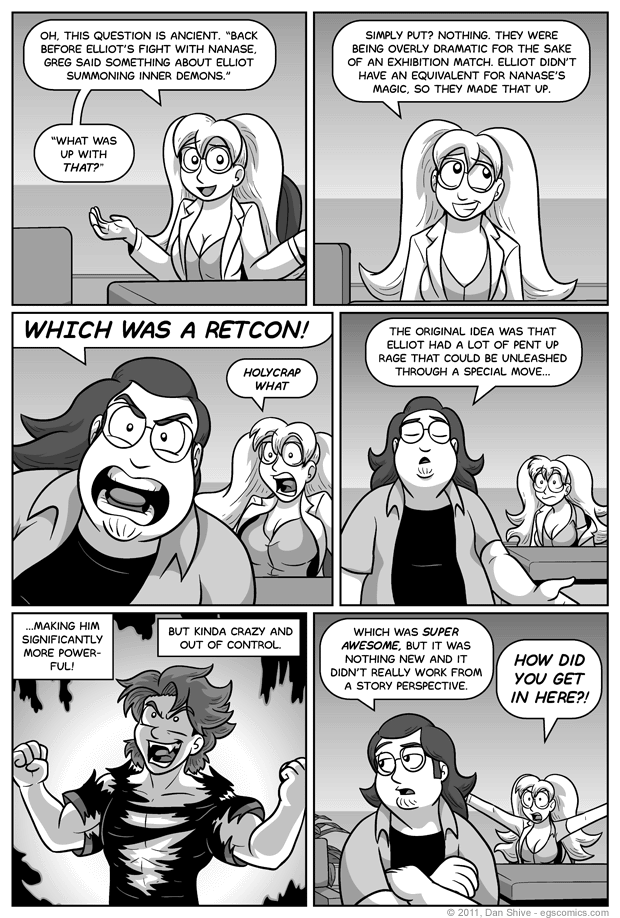 I'm writing this commentary shortly after posting the comic, and no sooner had I posted it did people point out that I had already addressed this question in a previous Q&A comic.. So THAT'S awesome.

In my defense, I'm not the only one who forgot an answer had been given as this question was among the questions I had received for this round of the Q&A. This comic wouldn't exist had I not received more e-mails about it.

Also in my (sort of) defense, my memory is VERY audio and visually based. I like that comic's gag, but the visual associated with that huge amount of information was just Chika reading letters while more interesting visuals took place in the background. I didn't remember the other two questions Chika answered in that comic, either. I guess I'm lucky neither of those were asked this time around.

On the plus side, this comic goes into a little more detail and shows what it would have actually looked like. Well, except for the clothes shredding, but the rest of it is accurate. Somewhere in the depths of one of my filing cabinets are old sketches of both Elliot and Ellen with seriously messed up hair and goofy fangs. The keywords here being "depths". Don't expect to see those sketches any time soon, assuming they still exist.

Ah well. I'll turn these lemons into lemonade, JUST YOU WAIT. In the meantime, I'm going to re-read those previous Q&As. I usually don't need refreshers when it comes to my own archives, but in this case, I apparently do.