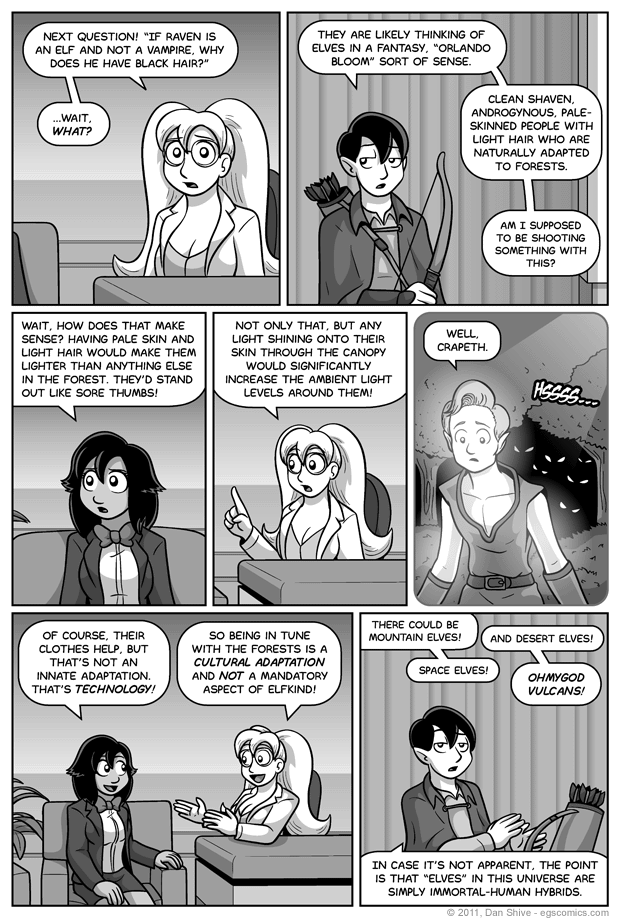 This comic's question is an actual question I received, and my reaction was similar to Amanda's. I think it was actually a joke, but it got me thinking (which is always dangerous) about how elves are often portrayed and how it seems contrary to a race of beings adapted to being stealthy in a forest environment.

The way I see, skin tone is less of an issue with their stealth than the supposed cleanliness and lack of body hair. A grizzled hairy dude would blend in quite well with a forest environment. Ever seen a lumberjack? No? Well, now you know why.

Even more effective would be fur. In fact, as blasphemous as this might be, the more I think about? Ewoks would be awesome elves. From a "we seamlessly blend into the woods" perspective, at least.

I've met people who have lost their temper over portrayals of elves in non-forest environments, or weren't in tune with nature, or had embraced some manner of technology that didn't seem "woodly". I'm guessing they would be a sight to see around Christmas time.

It's a common fantasy and sci-fi trope that fictional races are singular in their cultures, which I suspect is often because those races are acting as allegories for one or more real cultures. I don't know if it's really worth anyone's time to nitpick most instances of it, but I still have to wonder how Klingons ever achieved space travel. I mean, yes, wars foster innovation, but if the entire race is obsessed with near constant combat, where do the scientists and such come from? I wouldn't think most Klingon nerds would last long.