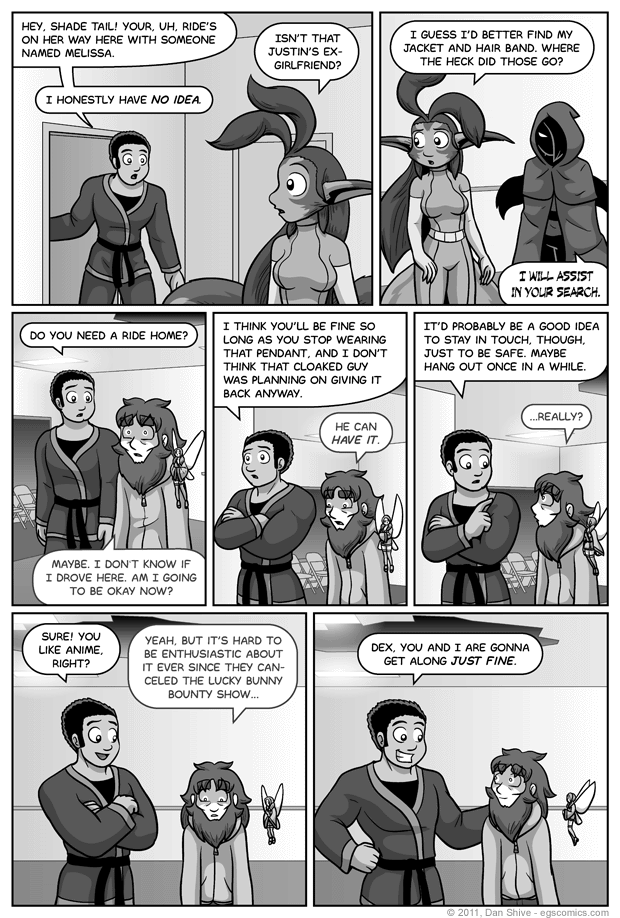 Today, I learned a valuable lesson about friendship. It can be lonely being a weird, awkward comic book geek, but you can rest assured that there are kindred spirits in even the most unlikely of places.

And, if in doubt, there's always the possibility that you'll find some weird magic pendant and a strange mark on your chest that makes you do all sorts of horrible things that somehow culminate in you making a new friend.

...Oh, that? That was a reference to My Little Pony: Friendship is Magic. You see, at the end of each episode, the protagonist, Twilight Sparkle, writes a letter to her mentor detailing a lesson she's learned about friendship, and I figured since this comic had a new friendship being made, I would, you know... um...

I'd intended for Greg to be 6' 7" tall, but while making today's comic, I discovered that the 3D model placeholder I had for him was actually closer to 6' 8.5". Whoops. When adjusting the height, I decided to just go ahead and make him 6'6". That's still six inches taller than even Justin, and makes it that much easier to have scenes with other characters without resorting to ca-RAZY viewing angles.

Some might cry foul at the inconsistency with Greg's early days, but looking at those early days, keeping Greg consistent would mean making him about 7' 6". The average female character in this comic is 5' 4". I don't like to have to deal with scale differences of that magnitude unless someone's shrinking.

The next Q&A is getting closer and closer, so please fling your questions in my general direction!