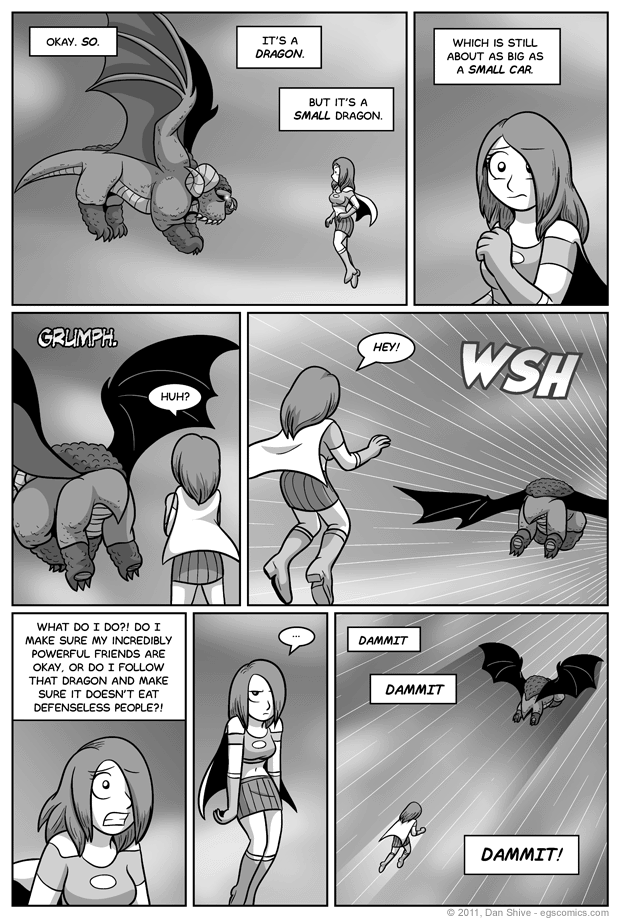 I considered having another random flashback of Greg's teachings to determine Elliot's decision in this comic, but I concluded that could be a) confusing given that Greg is an active participant in the current storyline, and b) would make the layout of this comic a bit more cluttered.

In any case, I didn't want Elliot to just chase after this thing without giving Greg and Grace's well-being any thought, but he probably is doing the responsible thing. I'm not sure what I'd do in his place. I suspect there's a good chance I'd be thrilled the dragon was leaving and immediately go back to my friends without considering the consequences.

I was not prepared for what I found. Bulldog skulls are, put simply, absurd. The skulls I saw had under-bites so severe that I think the human equivalent would have the lower jaw sticking out an inch or two past the upper jaw.

It may not be apparent from the angle in the previous comic, but I tried to reflect that in the Taurcanis. The nose sticks out a bit, but the actual upper teeth are further back, pretty much directly under the eyes.

I also learned that bulldogs are so-named because they were bred for fighting bulls. This might seem obvious to some ("they're called bulldogs! DUH!), but I always used to think the name was in reference to the shape of their bulky bodies and possibly their demeanor. The thought that people actually had dogs fight bulls never occurred to me because, frankly, WHY WOULD ANYONE DO THAT?!