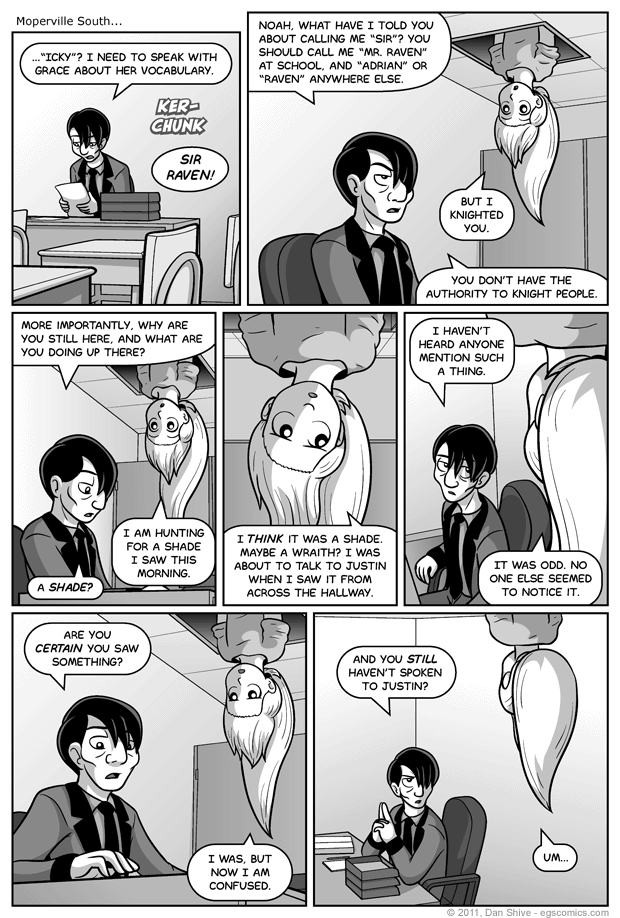 I apologize for the absolutely dreadful language in panel one. Simply dreadful.

I'm not sure if Raven is off-model in panel five or if that's simply not his best side. Noah's placement and the dialogue basically called for some weird angles in this comic, though it just now occurred to me that I probably could've broken up the the last two panels into four and made things easier to draw.

...Well, gingersnaps. Something to keep in mind for ze future, anyway. Although maybe it's better this way... the world may never know. It's sorta like a Tootsie Pop that way.

Moperville South apparently has movie-sized air conditioning ducts for ease of suspenseful sneaky sequences, which at the very least explains how Noah fit in there. This does nothing to explain how the hell he's keeping himself from falling in this comic, but I'm sure there's some illogical explanation for it

Drawing characters upside down is hard to do, which is why I bravely cheated and sketched Noah right-side up. From my perspective, it was like drawing him with some sort of weird vacuum over his head, and now I suddenly want to watch Wayne's World.

I believe this is FINALLY the comic where there can be no doubt left for anyone that Noah's right eye looks normal. I made a previous attempt during this storyline that still left some room for doubt, but you can see his right eye unobstructed and normal looking in four different panels in this comic. I hope this settles the matter.

E-mail inbox flooded with conspiracy theories about Noah's eyes in 3... 2...