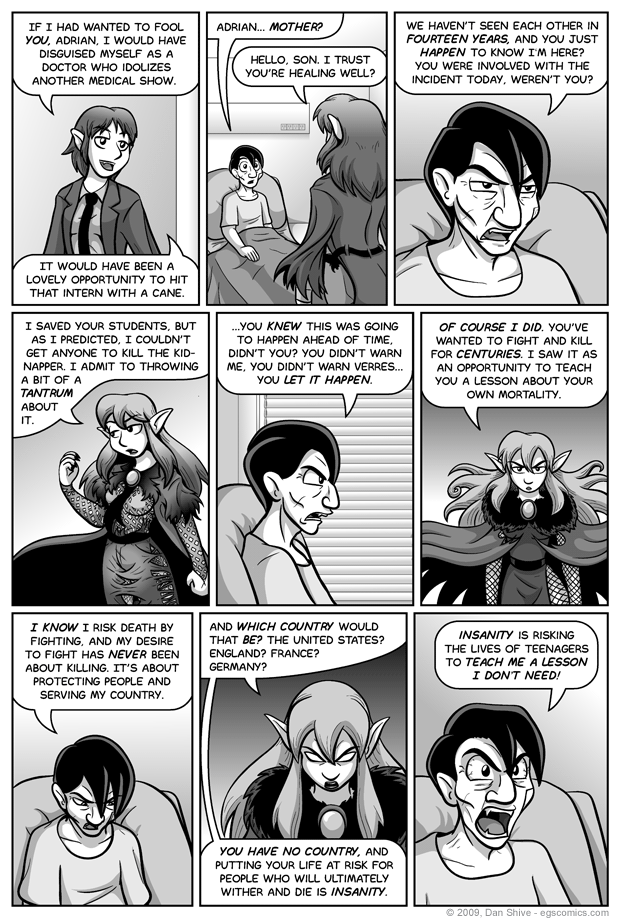 Raven reaches some quick conclusions in this comic, but to be fair, he has apparently known his mother, Pandora (AKA Chaos), for hundreds of years, and he was right to boot.

Raven is essentially a soldier who has been forbidden to fight. There have been numerous times throughout history when he has wanted to enlist with noble intentions but has never been able to. The fact that he wound up not killing Abraham when he had the chance is a possible indication as to whether he's ever actually killed anybody before.

I like the idea of Pandora going through slow transformations from one form to another instead of "poof" transformations. Not only is it fun to draw and can make for neat hybrids, but it's just more eerie for her to keep doing whatever she's doing without even acknowledging her own ongoing morph. It's like "yeah, I'm transforming. So what? It's a trivial matter."

Panel four is my favorite, and resulted in me developing a specific technique in Illustrator for transforming solid clothing into fishnet-like meshes without having to manually draw every opening. I admit to thinking shirts and such morphing into fishnet is cool, so it's likely to be seen again. What's less likely is that same fishnet also becoming thinner and thinner until it vanishes, but it could happen if I find a legitimate excuse for it.

I boasted shortly after the previous comic that this is a very important conversation in the history of EGS. I suspect people will question that assertion after reading this comic, but the conversation isn't over yet... ;)