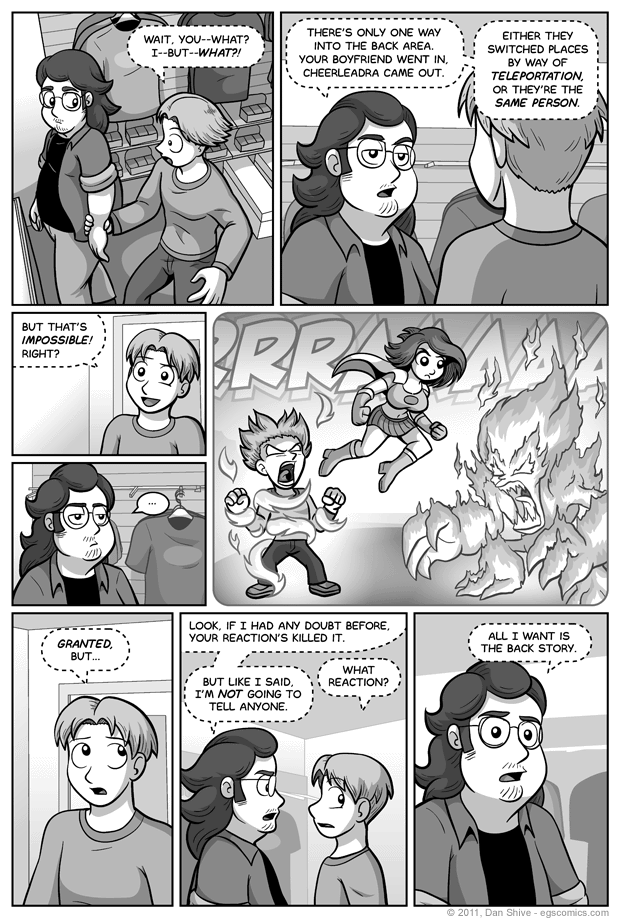 Posted January 17, 2011 at 1:00 am
I considered having George's silence in panel four whispered, but I decided it would've more likely been a distraction from a joke already in progress than something people would actually find amusing.

People other than me, anyway. I will always love you, cut stupid whispered silence joke...

When I initially wrote George's explanation, it was at least three panels worth of dialogue in an effort to address every last bit of logic behind his conclusion, shooting down nitpickery before nits could be picked.

It then occurred to me that George's explanation could be boiled down to the main point, and that everything else is just bookkeeping that only the pickers of nits would care much about.

There's probably even more recappery and evidence that George could have given, but all of it would just be there to try to convince the unconvincable that George was able to reach this conclusion. But you know what? I'm betting anyone who's that bothered by this also read the commentaries, so I got to give them my long-winded multiple reasons for George figuring it out anyway. HA!

Anyway, my point is ultimately that George had a lot of reasons he could have given, but he cut to the point and kept it brief. Now wasn't that nice of him? He should get a cookie for that. In the meantime, I will eat one in his honor.

I'm not entirely sure what George actually said that's being reflected in panel five. Maybe his glare alone was piercing enough to convey the message to Justin. That's hard to do, though. When I glare like that, people just think I'm hungry.

Part of the reason I went with the image is because dialogue could have easily fallen into overly-wordy territory, plus there's a bit of a logical fallacy to it. Yes, crazy impossible stuff did happen the previous day, and that suggests that other crazy stuff could happen, but that other crazy stuff could potentially include alternate explanations for Cheerleadra coming out of the back room. Those explanations get more and more convoluted and even less likely, but they would still be valid counterpoints.

So, yeah. If Justin had kept his composure better, he might've been able to make George doubt his own conclusions. FAIL.