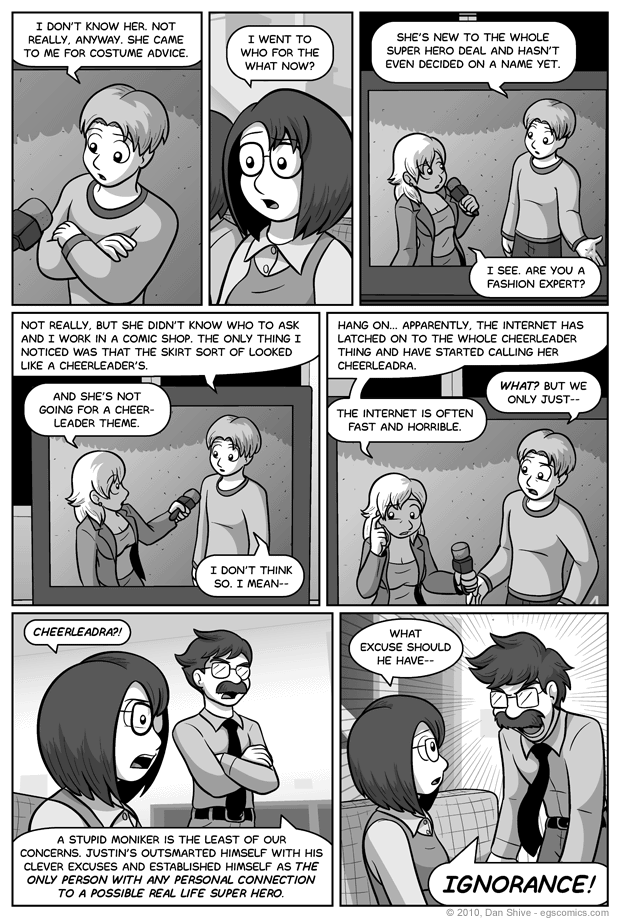 Posted November 10, 2010 at 1:00 am
Mr. Verres apparently agrees with many of this comic's readers in regard to the best possible answer being a plead of ignorance. I'm still not going to say whether I agree, as that could constitute a spoiler, but at least someone at EGS agrees with a good percentage of those surveyed.

I honestly thought I mentioned Cheerleadra in the commentary for this EGS:NP comic, but apparently, I didn't. So... yeah. I guess I've gotta explain where the name came from.

I used to play an MMORPG called Champions Online. The game lets you mix and match many powers, and I wanted to create a character who could have any powers I wanted while making sense in it's own sort of weird canon.

She was supposed to be a joke character, her bio claiming she was funded by sponsors and didn't actually like cheerleading, but went along with it for the sake of her merchandising contracts. I gave her several over-the-top abilities and emphasized strength, allowing her to throw trucks at people. One of the gag abilities I gave her was a chest beam, which is supposed to be a power armor and/or robotic ability. In her case, however, it made her look like she literally had killer cleavage.

Somewhat ironically, however, her power combination turned her into my most powerful and brutal character. Even her chest beam, intended as a joke power that I'd intended to replace after the joke wore thin, turned out to be her best attack. Seriously, she stuck her chest out and shot a powerful beam of light that sent bad guys flying. It was ridiculous.

In any case, I grew attached to this ridiculous character, and I wanted to settle on at least a temporary name for Elliot's super hero form, so I went with Cheerleadra. Not only is there a personal significance, but there are joke opportunities, so I'm happy with it for now.

Besides which, this is El Goonish Shive. We have a terrible name tradition to uphold, darn it!