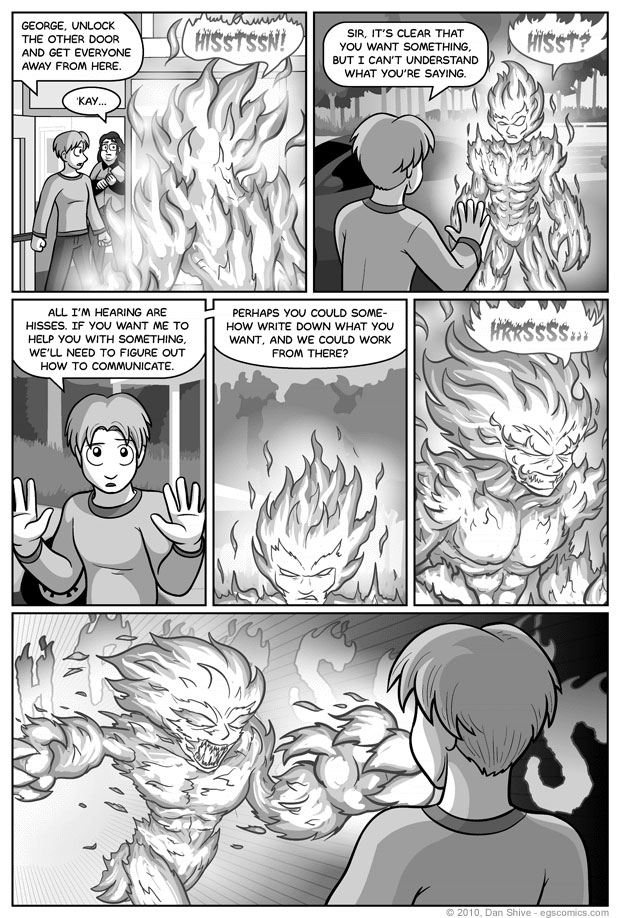 Posted September 24, 2010 at 1:00 am
I don't care what anyone says. Justin officially gets badass points for this comic.

No. Did I not say I don't care what anyone says? Put down that keyboard and step away from the e-mail client because this non-negotiable. Bad. ASS.

That is all. Well, except for the rest of the commentary.

George doesn't get badass points for this comic, but really, how well would most of us taking seeing a fire monster outside our home or place of business? It would be somewhat unsettling. .01% of us would confront it, 5% us would hide, another 5% would run, and 89.99% of us would take photos with our camera phones and/or tweet about it.

I was originally going to have fire shooting out of the fire guy's nose, puffing out like someone blowing smoke out of their nose, but it looked too cluttered in addition to being too goofy.

One thing that has been evident from past comics is that there are wooded areas around Moperville. What has been less apparent due to a lack of backgrounds is simply how many trees there are. The entire region is littered with them, which is what I would consider "normal" from my perspective. If I go somewhere where there aren't a lot of trees, it feels weird to me.