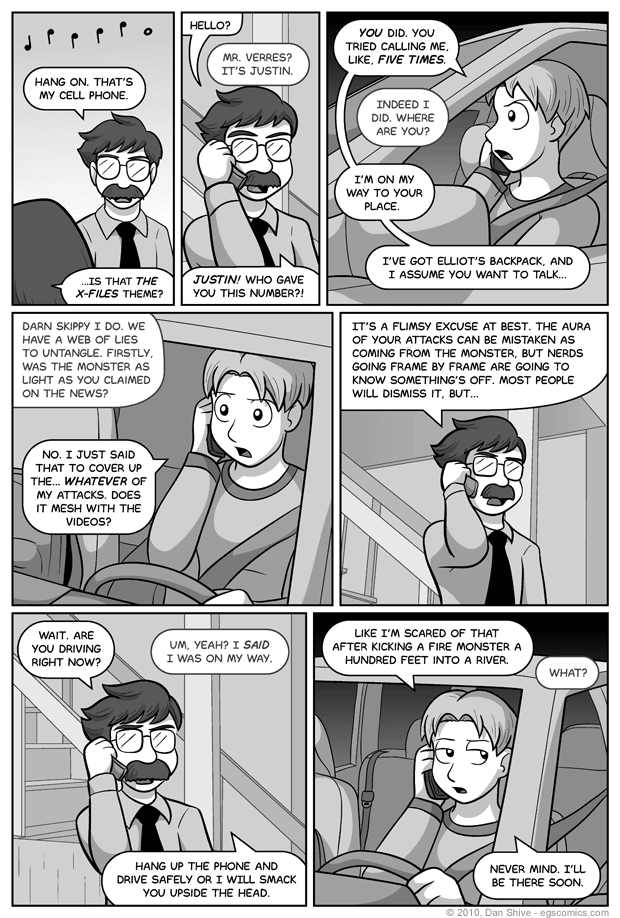 Posted November 12, 2010 at 1:00 am
Justin Tolkiberry doesn't... um... well, crap. I thought I'd do a whole list of Chuck Norris-like Justin Tolkiberry quotes here, but I'm running on empty right now. I might come back to it after a Walker: Texas Ranger marathon.

You may recall a seemingly out-of-place question a couple comics back regarding the lightness of the monster. This is why. Justin's apparent excuse for being able to kick a monster a hundred feet into a river was "it was totally light! For reals, you guys!"

He probably didn't say it quite like that, but you get the idea.

What's kind of fun about working with virtual 3D sets is that I can actually know how far the monster was kicked. Well, sort of. Measuring the exact distance over a curve is something I'm not sure how to do, nor do I feel like figuring it out. The straight line distance between the impact of Justin's kick and the landing spot in the water, however, was about 124 feet.

I actually considered giving Mr. Verres a Lady Gaga ringtone, but he smacked me upside the head and told me to pick something else. He seems to be big on that lately... maybe he watched a Three Stooges marathon during his "vacation".