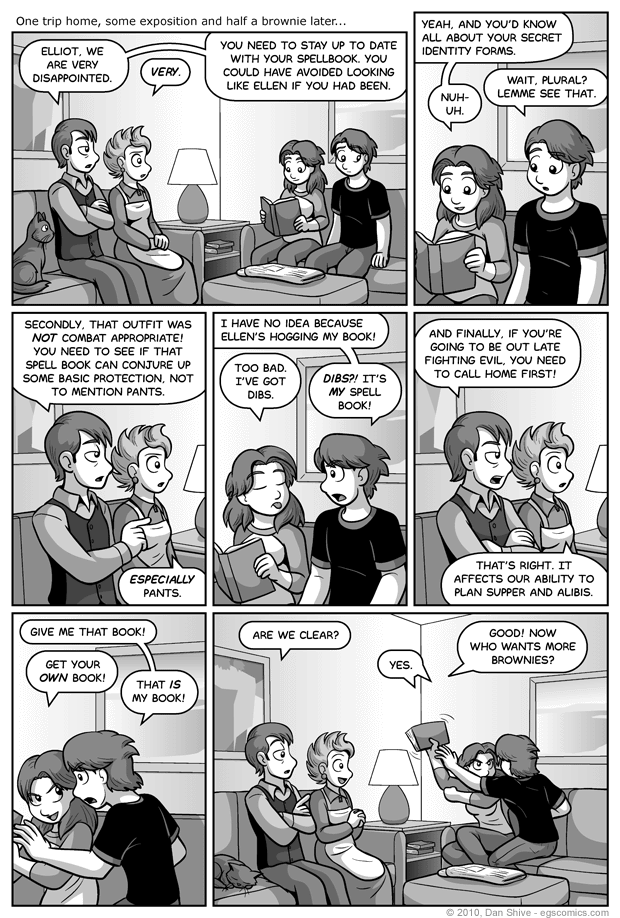 Posted December 10, 2010 at 1:00 am
I mentioned in the previous comic's commentary that one of the reasons I liked the in-story reasoning of not getting Ellen involved during that scene was carrying on a tradition of error by way of conclusion jumping.

I also liked that reasoning because it gave me the idea for this comic, and I love writing scenes like this. There's a certain madness to the Dunkel household that, in my opinion, makes the Verres household look relatively sane. It's enough that I feel I must now assure you, the audience, that there are no questionable ingredients in Mrs. Dunkel's brownies.

And now, an Ellen teasing Elliot montage (sort of):

Pretzel for a family tree
Disturbed on principle
Revenge of the pretzel
Evil Genius
At least he's not Jar-Jar
Does this count? Eh, whatever
The stick strikes back... well, not really

And so long as I'm linking a whole mess of stuff, linkage to most recent previous Dunkel parental madness.

And, BORING PRODUCTION DETAILS! *applause* I probably could've been a lot lazier with this comic than I was. While some copy/paste did occur with some (not all) of the background elements, I didn't do that for any of the characters. With Elliot and Ellen, I clearly couldn't have done that, but with Mr. and Mrs Dunkel? I think it's probably better looking by virtue of not copying and pasting them from panel to panel, but I definitely could have gotten away with it. Kevin might've complained, but whatever.

The paintings in the background were made by taking photos I had taken and reducing them down to simpler shapes and shades of grey. The one over Ellen and Ellen is just a landscape photo of a lake taken during winter, while the one over their parents was actually a photo of a cat chilling out in a FedEx box under a Christmas tree.

I know that's impossible to tell from what's in the comic, but my goal wasn't to have a cat painting on the wall. I just wanted a quick way to create something that would look like a framed painting in the background that could be easily consistent in multiple panels and potentially multiple angles, and using photos I had taken as guidelines accomplished that.

That, and it adds useless trivia to this comic! WHOO!