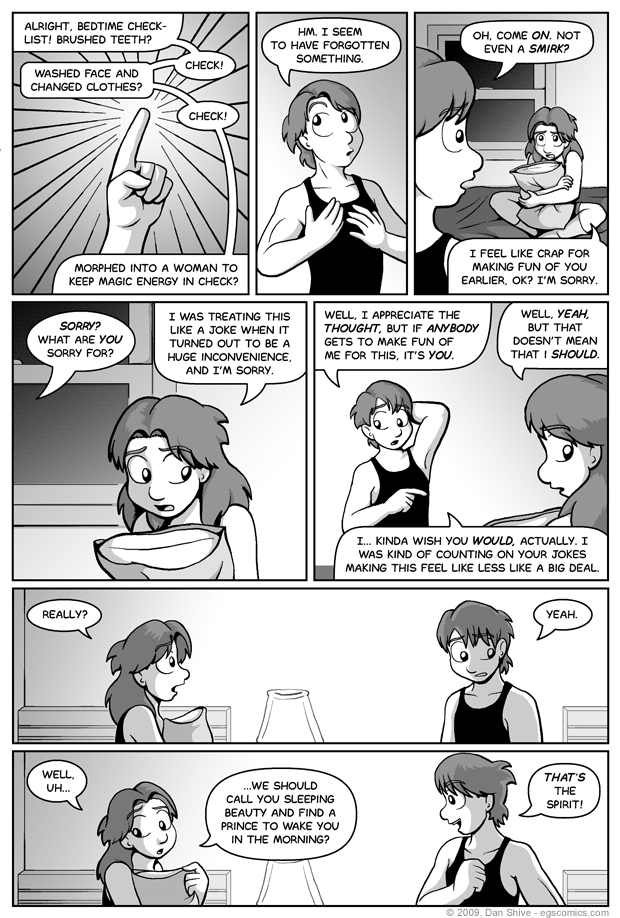 Before I address anything else, I just want to say that Ellen hugging her pillow is cute.

As much as I enjoy just working in pure black and white, I quickly ran into problems with certain characters and their hair (and believe me, I tried). While I am quite capable of making varied hair shades without busting out the grey, I don't feel the results really suit EGS. It's like the hair would have to take on a style of its own to work right.

Elliot's attitude is based on my own. As people who know me in person know, I make jokes. LOTS of jokes, many of which are self-depreciating and/or totally insane if one doesn't realize I'm joking. This is generally how I keep my spirits up, and I will joke about things that are bothering me to feel better about them. In short, I'm naturally wired to be a comedic cartoonist.

Generally speaking, I would want to be the one making light of my own troubles and would get annoyed by someone else doing so, but in Elliot and Ellen's case, I feel they're exceptions for each other and can appreciate a bit of shared mockery.

To the point, Elliot is trying to not get too down about this whole situation, and he doesn't want to see Ellen bummed out about it, either. He would prefer they both be able to make fun of it. Ellen feeling bad, however deserved, just makes the whole thing seem more serious for Elliot, which is the last thing he wants.