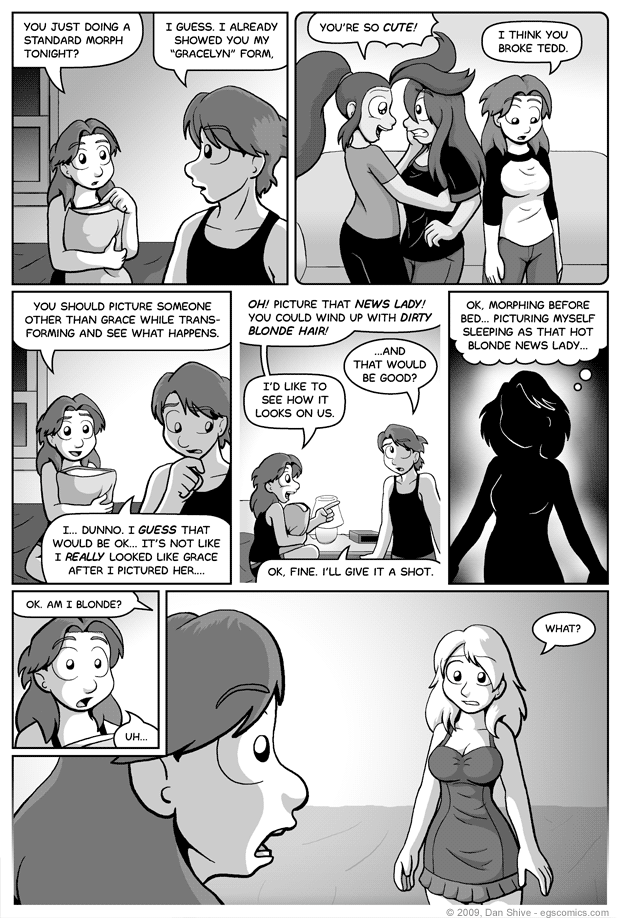 This page is somewhat ironic. The main reasons I've given Elliot the ability to morph his clothes is to allow him to be more inconspicuous and avoid wardrobe malfunctions when transforming, and yet his very first clothing morphs have resulted in a very conspicuous and revealing outfit.

It fits the story, but perhaps, on some level, I wanted to provide a peace offering to those who like the wardrobe malfunctions. That, or I just wanted to draw some variation of Carol in a chemise.*

This page took a ridiculous amount of time for me to complete. I can think of several mistakes I made that contributed to this, but even so, it's odd. I'll find out if I learned from these mistakes while working on the next one.

* This small paragraph of commentary has lead to some confusion.
The assertion that this outfit might be a peace offering on some level was a consideration made in retrospect after I had planned to do it anyway, the same level being a "maybe subconsciously" sort of thing. It's more of a "it's kinda like a..." than "it is a..." scenario.

Believe me, if this was simply fan service, Elliot would have wound up in something much more revealing than that.