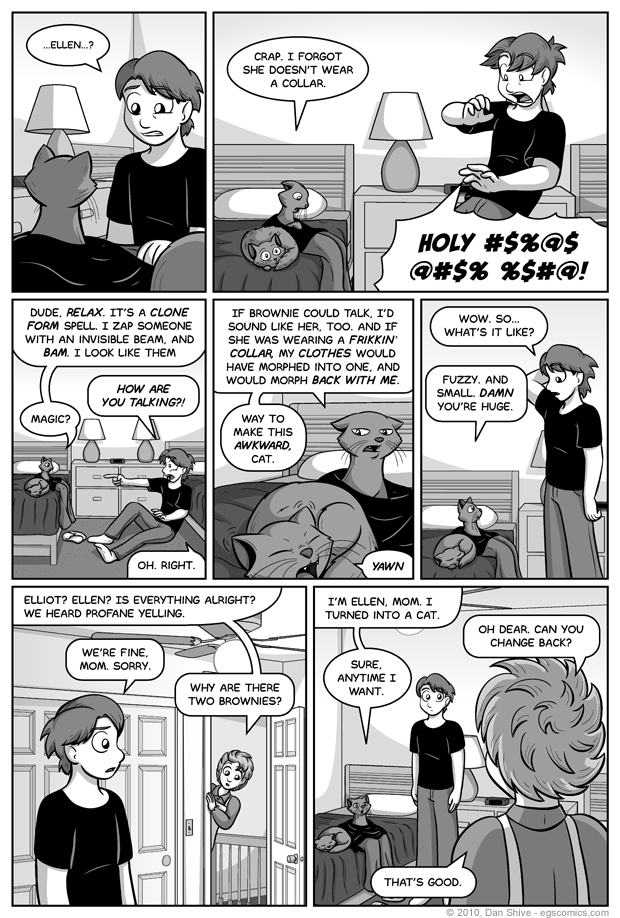 "No dinner for you!"

"Okay, fine. You can has cheeseburger."

Now that I've gotten THAT masterpiece out of my head, we can move on.

We are now dangerously getting close to something resembling a plot for this storyline! I fully admit this storyline is progressing at a leisurely pace, though it's worth noting I was raised on The Simpsons, a show that has frequently had first acts that lead into the final two while having little to nothing to do with them up until right before the commercial break.

Reason #2 for introducing this spell now: the reintroduction of Mrs. Dunkel, who has not been in the comic for years. It's a character trait of both of their parents to be overly accepting of and nonchalant about the strange things that happen with their children, particularly given the very nature of Ellen's being. It's not that they don't care; they're just unusual people.

Mrs. Dunkel's hair has always been a bit of a riddle to me. I wanted a curly look, but if you look back at her first appearance, it's something of a mess without real structure to it. I decided there needed to be some guideline for drawing her elaborate hair, and eventually settled on a clockwise buzzsaw (clockwise from the front, anyhow). I am fond of the results.

Given how useful a tool was as a guide for drawing hair, I look forward to designing future character hairstyles using the same principle. Hammer hair, screwdriver hair, wrench hair... the tool shed is my hair salon, and it is glorious.