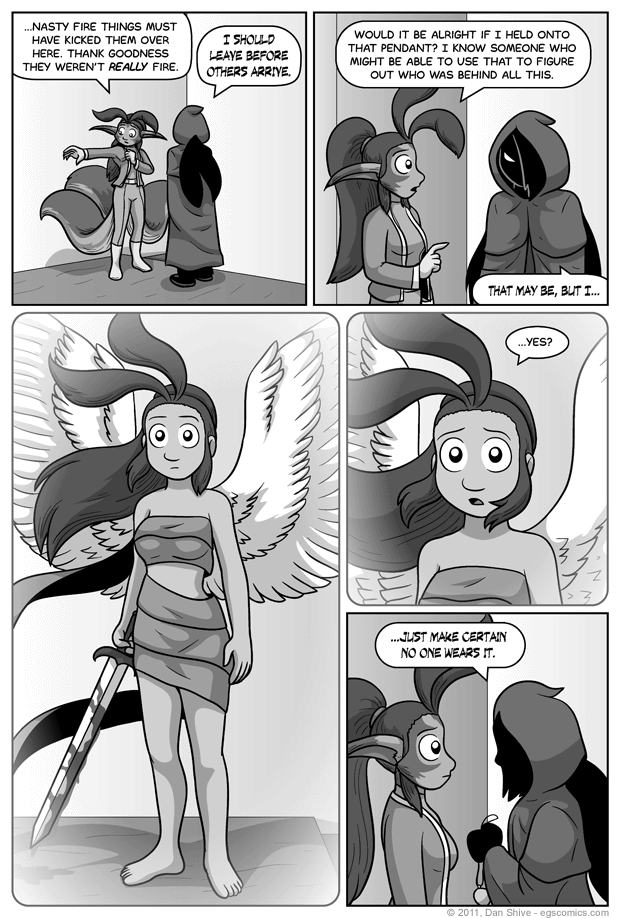 Okay, so I admit that Noah seeing Grace as some sort of avenging angel of death or something lends a great deal of credence to the theory that he is, in fact, the child left behind, BUT! Is it not conceivable, nay probable, that Noah simply has some manner of bizarre deadly angels with ponytails fetish that was triggered upon seeing Grace put on her hairband?

This is why you shouldn't jump to conclusions, dear readers. They will make you look silly.

...This is the part where I was going to put a headline and say all sorts of other stuff about this comic, but I don't really have much else to say other than "it was fun to draw angel Grace". Things went pretty smoothly with the production of this comic, so... yeah.

As I've been repeatedly going on about, the next Q&A will be following this storyline, and I'm still accepting questions. Based on some of the questions I've received, however, I feel I should point out that I will be avoiding spoilers in the Q&A. Some minor spoilers are pretty much unavoidable, but questions along the line of "will ______ happen" simply won't be answered. If and when "______" happens, it will be revealed by virtue of having had happened.

I thank people who asked such questions all the same, but I felt I should try to make that clear. Besides which, there's still time to ask less spoilertastic questions, so if you can think of one, ask away! Questions about things that have happened, the characters abilities, magic, etc, are all fair game so long as I don't think answering them would be spoilermatic.