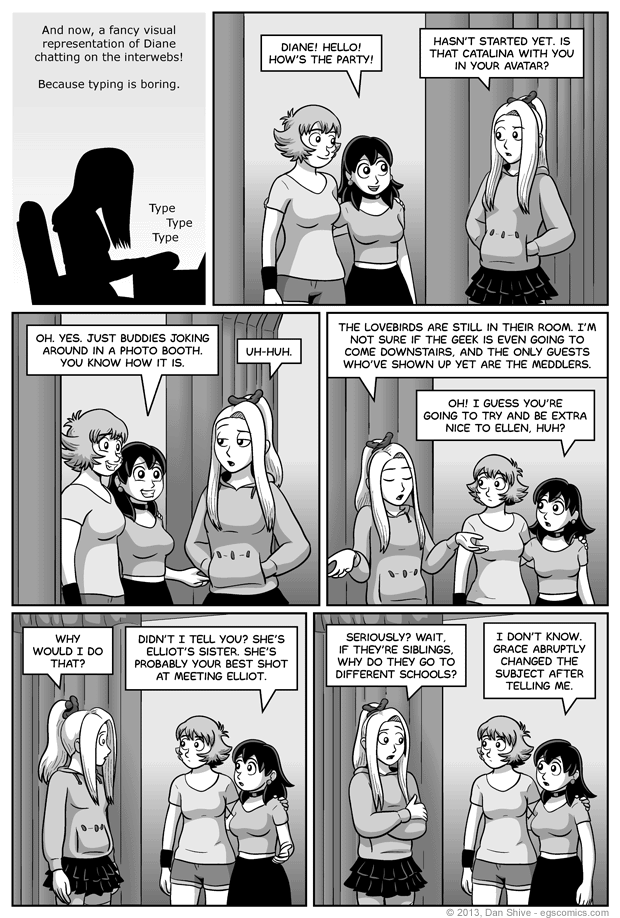 Posted May 15, 2013 at 1:00 am
- Grace meeting Rhoda
- Grace the math tutor, Rhoda the history tutor
- Catalina has a date!
- Diane first developing an interest in Elliot
- Susan chatting on the interwebs with a relevant avatar
- "Are you ever going to introduce me to this 'Catalina' friend of yours?"
- "You will be mine. Oh yes. You will be mine."

Did I mention in a previous comic commentary that the "you will be mine" line was essentially a reference to Wayne's World? Well, it was. On the subject of movies, Wreck-It Ralph remains awesome.

I'm not sure if this counts as a Catalina appearance. Does a silent appearance while manifesting as part of a visualization of an online discussion in representation of an avatar used by one of the chatters who is not them count? I suppose it could have been worse. Photo booths tend to give out multiple images. Rhoda's avatar could have been a scan of several. I'm not sure what the exact visual representation would have been, but it would have at least resulted in couple or more pairs of Rhoda of Catalina.

The curtains are intended to represent the curtains outside of a photo booth. I still see those things on occasion, though I don't know how common they are these days. For all I know, they e-mail you the results. Or maybe they're the same as they've always been. I suppose I should have researched the matter thoroughly by taking some stupid pictures of myself.