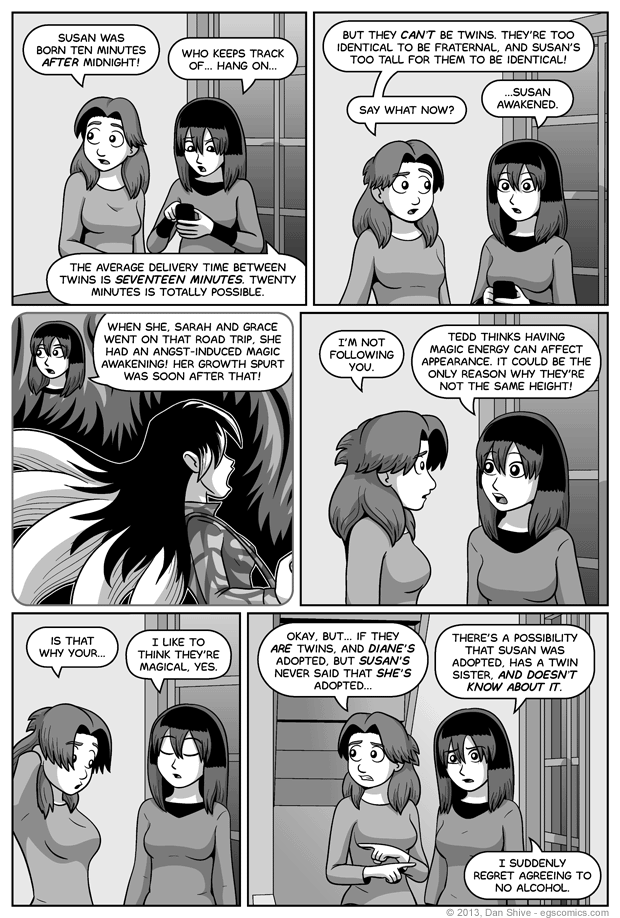 I will be posting status updates on comic creation via Twitter. Granted, I'll be sure to rant about other stuff, too. I'll use the #EGScomics hashtag when saying anything buffer or update relevant.

- Angst induced awakening
- Susan having presumably told details of the trip to Nanase
- Growth spurt
- Magic affecting physiology
- "...That girl is definitely taller than me."

For the record, I was joking when I said they couldn't possibly be sisters in the previous comic's commentary.

Based on quick searching on the interwebs, seventeen minute is (supposedly) the actual average. Of course, "average" only means so much. For all I know, it could be possible for the delivery time between twins to be much faster and/or much longer. In any case, I believe it safe to conclude that twenty minutes is realistic.

Back around the time leading up to Susan's growth spurt, I had been discussing the matter of character height with people. Some had commented on how my characters seemed relatively short, and how I should make some of them taller.

It was at this point that I got the idea for Susan's growth spurt, the possible explanation for it, and ideas regarding how it could complicate things once we finally got around to addressing the Diane and Susan connection. I had already made them less identical by changing Susan's "natural" hair color, and I felt a more conclusive "can't be explained away with a simple dye job" difference on top of that was welcome.