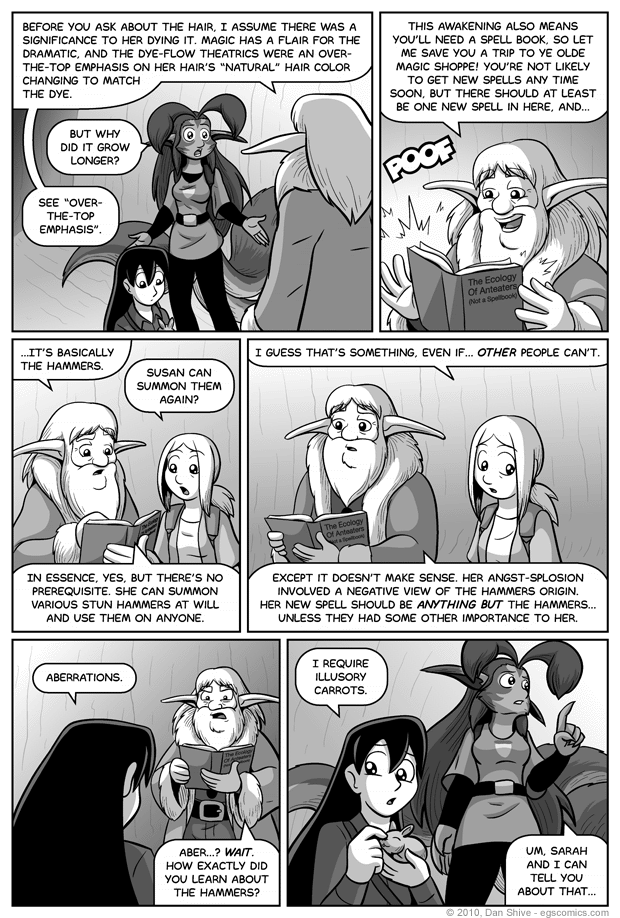 Posted July 12, 2010 at 1:00 am
This comic has at least the third-most subtext-filled request for illusory carrots in the history of comics.

I'm somewhat surprised that I haven't witnessed predictions that Susan would get access to the hammers again as a result of the awakening. I've mostly been seeing positive and negative talk about her becoming a "magical girl".

One of the reasons I'm surprised is because I'm certain I've previously expressed the sentiment that, while I had grown weary of the hammers, I still wanted Susan to have them. I think of her as the "hammer queen", after all. As far as I'm concerned, she's got to be able to summon hammers independently of whether other characters get to.

There was a particularly elaborate line of Susan's that got cut from this comic due to lack of space and the impact it would have on pacing, but I like it enough to immortalize it here:

"The discontinuation of a necessity for hair dye is a boon to my monetary reserves regardless of a trimming now being mandatory."

Just rolls of the tongue, doesn't it?

In case it's too difficult to read on-screen, the spellbook says The Ecology Of Anteaters (Not a Spellbook). This is something of an inside joke, as I drew a comic back in middle school where two friends were at a science fair and one was presenting an ant farm while the other was presenting a project entitled "The Ecology Of Anteaters". I don't know where the one friend got an anteater, but needless to say, there was conflict.