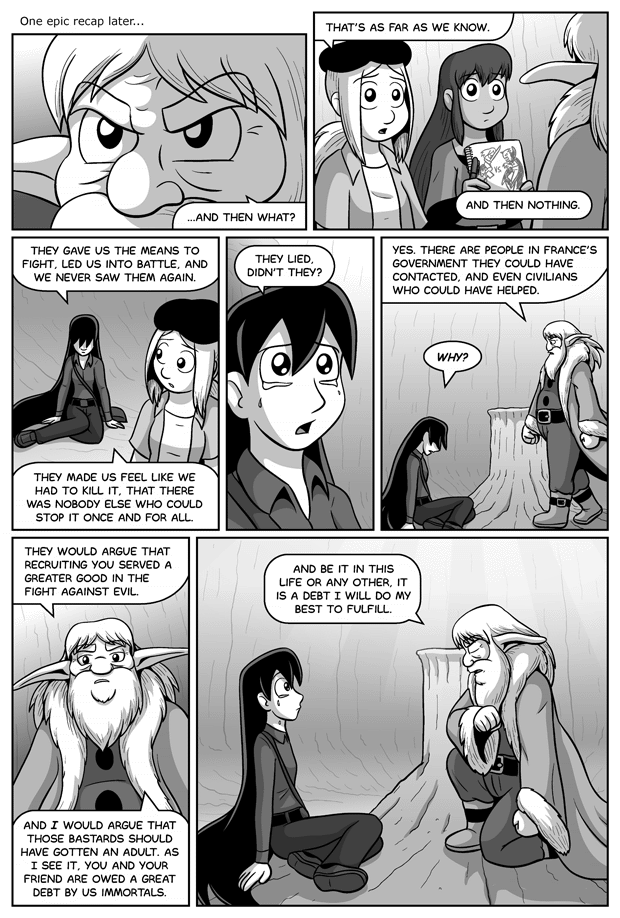 Posted July 14, 2010 at 1:00 am
I can only assume that everyone now regrets expressing hope that I would skip the recap, as it should be apparent just how epically awesome it was. I can pretty much guarantee that the next sketchbook entry will be a closeup of panel two with modified text, so there'll at least be a better glimpse of some of the awesomeness that was the recap.

I've made an effort to never show modern-Susan crying. She's cried in flashbacks, but with that exception (and unless I've screwed up somewhere), she was never supposed to cry prior to now regardless of how upset she might have been. If I have screwed up in this regard, I might have to go back and Lucas-in some cut onions to excuse it.

My one big regret here is that we never got to see Susan giving the illusory bunnies illusory carrots, because I guaranteed that happened off-panel. Jerry totally made carrots appear and those bunnies totally ate them. That might have to be another sketchbook entry, because I was looking forward to having that moment up until sadly realizing that there simply wasn't room for it. I was gonna link to the nom nom nom song and everything.

Another thing left out of the comic is precisely how Susan deduced that she had been lied to, but I think it's reasonable that she reached that conclusion, and probably has suspected it for a while. For one thing, Susan knows for a fact that the United States has people for this sort of thing, and it would be logical to conclude that a country like France would also have such people.