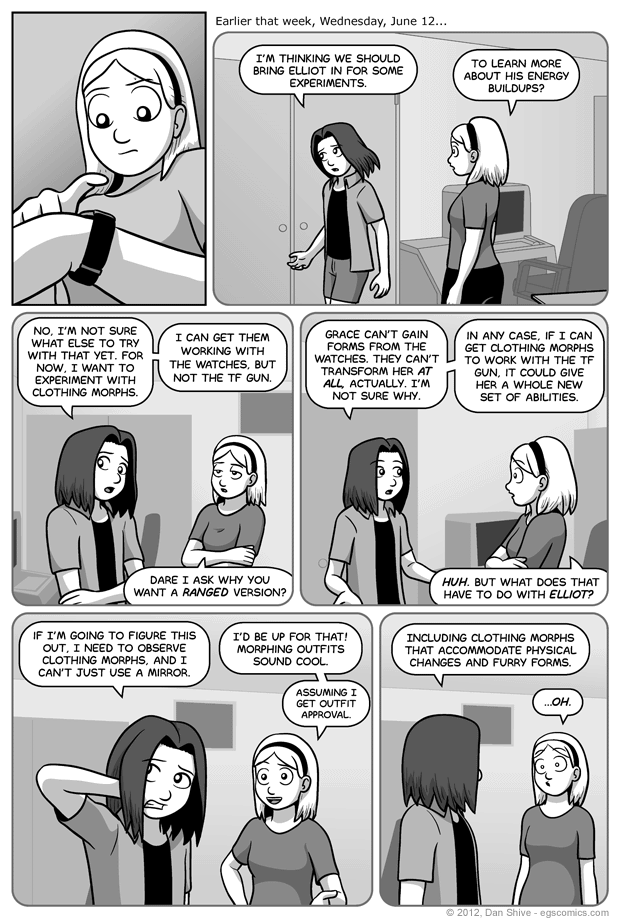 Posted October 19, 2012 at 1:00 am
- Clothes morphing (one of many examples, but I chose one from Power Fantasy)
- Tedd's observational prowess (or possibly just fancy glasses)

Okay, I basically said in the previous comic's commentary that this comic would explain what they were up to, and I guess it sort of does, but there's apparently at least one more comic before the picture is 100% clear. Wednesday me apologizes for this, but still isn't getting any dessert tonight.

When a character has a lot to say, as Tedd does in this comic, I find it's a lot more coherent and acceptable by stealing a tactic novels have been using for several years now: PARAGRAPHS. In all seriousness, it's a common tactic in comics in general, but it's easy to put too much text into one bubble.

I don't know why it's a trap I've fallen into myself, as I really have trouble reading large blocks of texts. Even novels with their fancy paragraphs can be a strain on me, as there's no additional spacing between paragraphs. I generally find it much easier to read stuff on the internet due to those spaces being the norm.