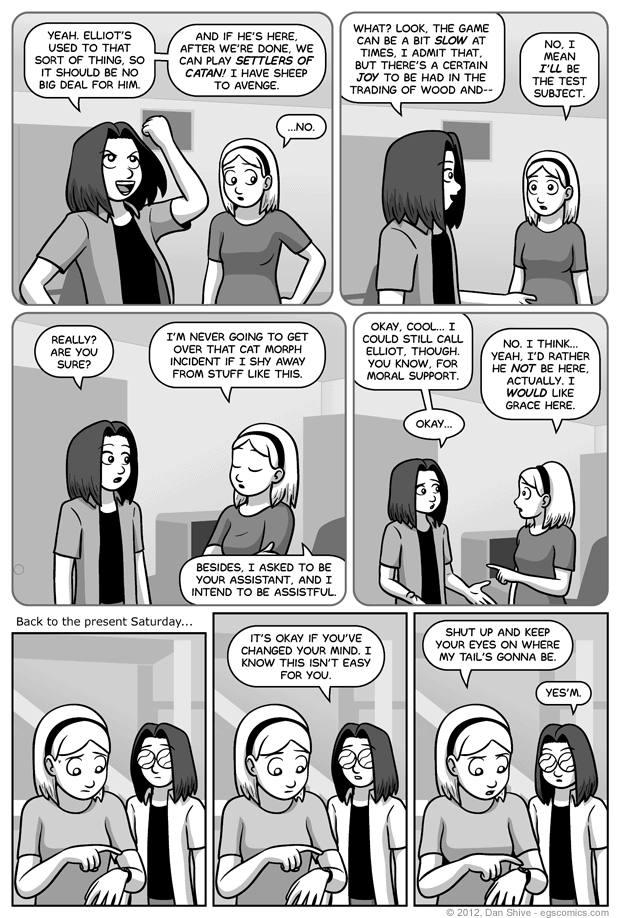 That small bit of hesitation in Sarah's dialogue back in that August comic was genuine foreshadowing. I'm not saying this to brag, but rather to admit to a foreshadowing addiction that results in even my foreshadowing having foreshadowing to the point where an ellipses can be evidence of future plot events. I might be foreshadowing something right now without even realizing it.

Fortunately, I understand that admitting I have a problem is the first step to solving it, and since I don't know of any other steps, I must conclude that it is also the last. Problem solved! Just in time, too. I'm attending a movie party tonight and all spoilers are banned, and that impulsive foreshadowing could have resulted in wacky hijinks.

I have learned a valuable lesson over the weekend: Rounded lighter panel borders and subtle changes in clothing are not enough to make universally clear that what we're seeing is a flashback. As such, I have added a bit of narration to the previous comic, and this comic has more narration than it would have originally had (more than zero).

Settlers of Catan is a board game I happen to like. Players have resources they use to build roads, buildings, and cards with special effects. These resources do, in fact, include sheep and wood.

Okay, they call them wool and lumber, but I never call them that. Besides, if I'm only trading wool, wouldn't that mean I'd keep the sheep and get more and more wool over time regardless of the dice results? Or maybe the settlers eat the sheep? Aside from grain, they're the only edible resource... Eh, I'm sure this is all addressed in the instruction manual.