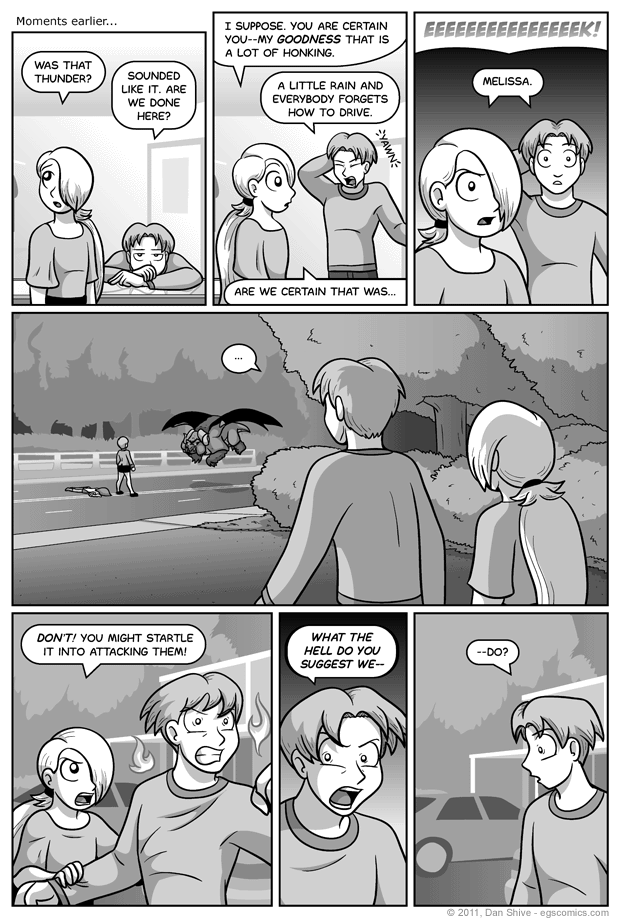 Posted April 25, 2011 at 1:00 am
- In contrast to Justin's previous reaction to peril
- Seriously, he did a good job of keeping his cool
- Previously on the Justin and Noah show...

[i]Brave Sir Noah ran away.
Bravely ran away, away!
When danger reared its ugly head,
He bravely turned his tail and fled.
Yes, brave Sir Noah turned about
And gallantly he chickened out.
Bravely taking to his feet
He beat a very brave retreat,
Bravest of the brave, Sir Noah! [/i]

Okay, so there's a chance he didn't chicken out, but come on! It was an excuse to reference Monty Python and I am but a man!

Just how often am I going to reference The Hulk in these commentaries? Yeesh.

Anyway, when originally writing this scene, Justin was concerned, but not "I gots the crazy eyes" concerned. It didn't take long for me to realize, however, that Justin would NOT take what he's seeing here well.

Back when I regularly hung out in a comic shop, I suspect World War III could've broken out and we'd dismiss it as weather or people being bad drivers. We'd get done playing our card games and step outside to discover the world had turned into the Fallout universe. Being nerds, we'd momentarily embrace the post-apocalypse before being utterly annihilated by roving mutants.

Speaking of Fallout, my Fan Art gallery on Deviant Art continues to grow. I'd like to think I come up with some of the strangest crossovers out there, but this is the internet and we all know that's not true.