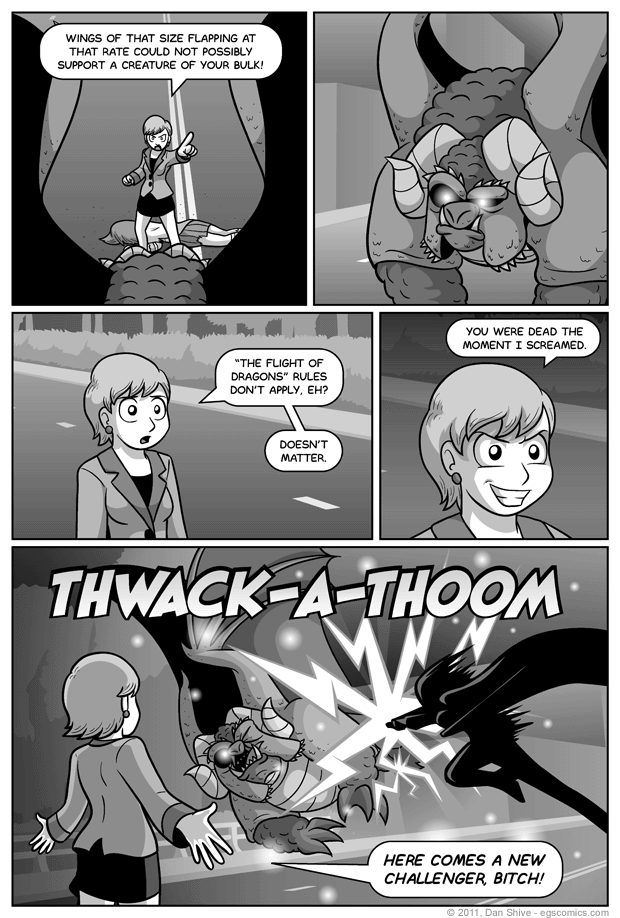 I consider the last line of this comic to be somewhat indulgent, but I think it's appropriate nonetheless. It's in reference to fighting video games, and Smash Bros in particular. This is, of course, not the first time I've referenced that series.

The Flight of Dragons

I have no idea how obscure this movie is, but if you're like me, the mentioning of it was like a sucker punch of Nostalgia.

For those not just sucker punched, the story involves the advancement of science and how it was basically killing off magic. Pointing out why something that was working via magic shouldn't scientifically work could cancel out the magic.

It was a sort of metaphor, but I can't help but be reminded of Wile E. Coyote cartoons and gravity not kicking in until one looks down.

I wanted Melissa to have a geeky quote to say to the dragon, and considered staples like "you shall not pass" and "stay away from her you bitch", but none really fit. I gravitated away from quotes and considered just having her nitpick something about the dragon, and it was at that point that my childhood memories of The Flight of Dragons movie hit me like a ton of bricks. I had completely forgotten about that movie, and the sudden nostalgic rush almost made me dizzy.