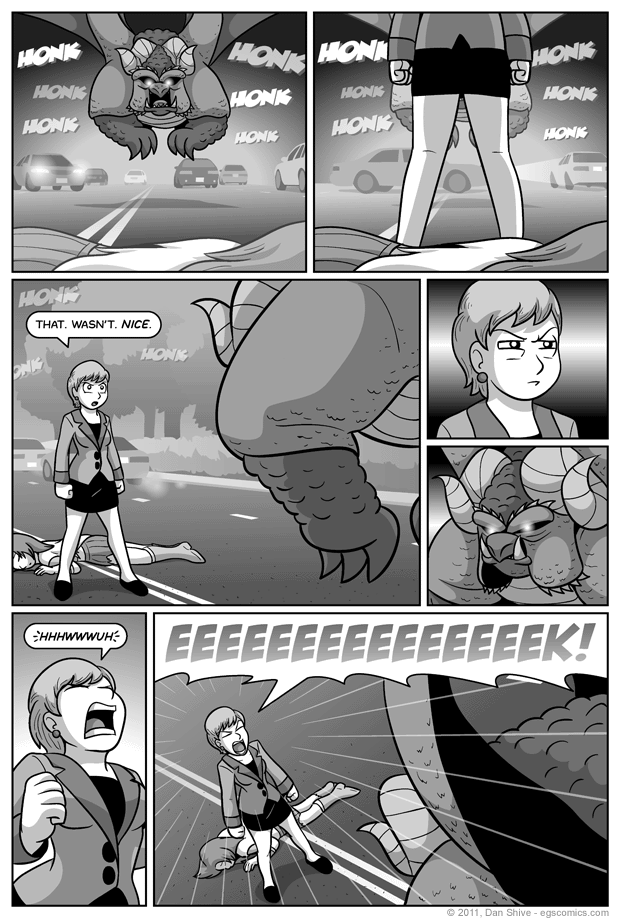 Posted April 22, 2011 at 1:00 am
We've had badass hair in the wind when there is no wind. We've had badass... um... hm. What's a second unusual badass thing that's been in this comic? Dammit, things are better in threes.

Ah well. Point is? Badass girly scream. There. At least the list will be three things when next I have a new weird badass thing.

I got a LOT of responses about battle damage and dino damage after the commentary for yesterday's comic! Significantly more than responses to Elliot being blasted out of the sky.

DUDE! He heroically let himself get blasted out of the sky and into traffic! That's worth at LEAST a "sorry you got blasted" card from the super market. That aisle next to the deli is there for a reason, you know.

Anyway, "battle damaged" toys apparently go WAY back. "Dino damage" still stands out for being weirdly gory, but it can hardly claim to be unique beyond that. It does make me wonder if there are gorier children toys out there... I'm not sure if I WANT to know, but I wonder nonetheless.

I was about to rant about squinting, but apparently, I've already done that. What I apparently FAILED to do, however, was mention my desire for Clint Eastwood and Steven Seagal to have a squinty staring contest. It'd be difficult to judge, what with them squinting, but I'm sure judges armed with telescopic lenses directed at the competitor's eyes could pull it off. The only danger is that the raw squint energy would destroy the world, but that's a risk I'm willing to take.