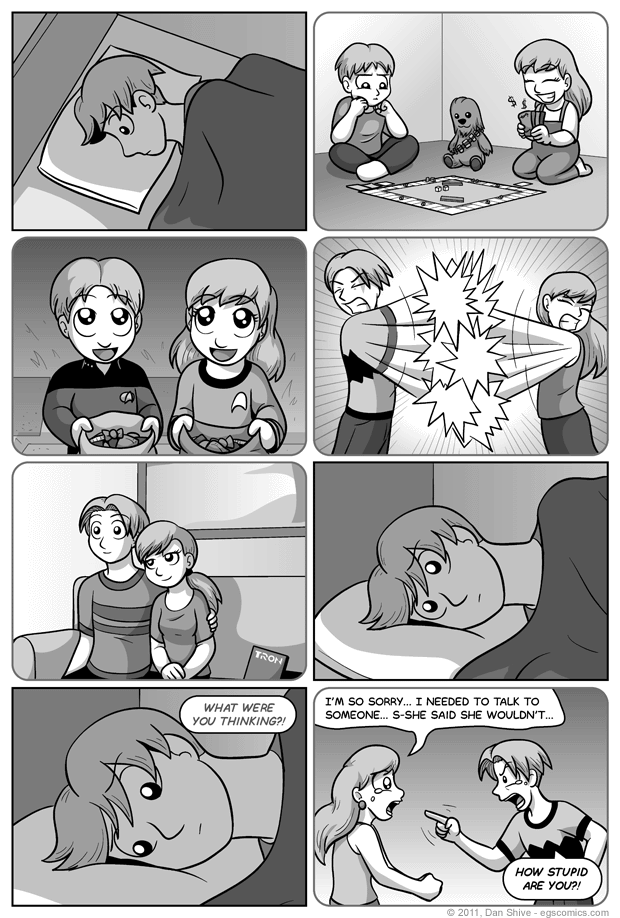 Is...is that a ball of yarn? Those lines are totally how I draw balls of yarn. That had to have been intentional, but why did I...? They're not cats, for goodness sake. I really wish I'd been doing commentaries, back then, because I'm going to be scratching my head on that one...

ANYWAY! As keen eyes may have already noticed, the last panel of this comic is based on the 11th panel of that older comic.

They're clearly playing Monopoly, and while the level of detail makes it impossible to tell, I'd like to believe it's a Star Wars variation.

As true as the above assertion is, however, that's NOT why there's a Chewbacca-like stuffed animal there. No, that fuzzball wound up getting included because the panel looked empty to me, and it seemed like an appropriate thing to include. Looking up references got me wondering about Chebacca's belt, however, and I'll be posting some of my tweets on the subject at the bottom of this commentary.

WOW. Either those are small bags, or Justin and Melissa tricked and treated the HELL out of the neighborhood that Halloween.

For you non-Trek fans out there, Melissa is dressed like someone from The Original Series, and Justin is sporting a Next Generation uniform.

When Susan and Tedd first got into a slap fight, it was less "friendly debate" and more "angry Susan is angry", but it seems to have become synonymous with spirited, geeky debating. The comic shop must get destroyed whenever a new sci-fi movie comes out.

They're apparently watching Tron, a movie I have yet to actually see (though I did see the sequel).

STAR WARS FANDOM, I SUMMON THEE! What are in those pouches on Chewbacca's sash...thing?

People are suggesting crossbow bolts, but the pouches seem small for those, so I'm going with Kibbles N' Bits.

In all seriousness, they probably are for the crossbow, BUT there are two different pouch sizes, so one size could be for Kibbles.

Kibble pouches might sound silly, but do you see anybody else carrying rations? No. SOMEONE'S gotta be on that emergency survival ball.

Han always makes fun of him for it, and Chewie thinks "someday we'll need it", but that day comes, and he's already eaten all the kibbles.