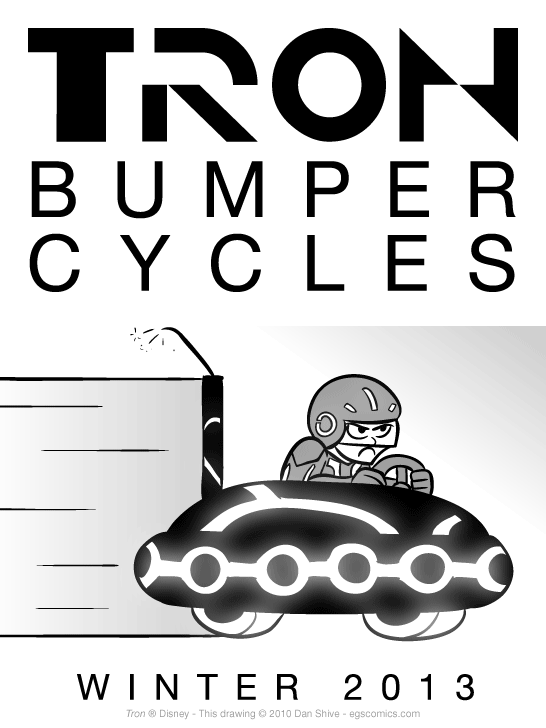 What? This totally has to do with EGS! Justin works in a comic shop, right? And nerds nitpick stuff there, right? Also, this might shock you, but Tedd's kinda nerdy, too. I am having trouble thinking of what to link to for his example, however...

I have seen Tron: Legacy, and my opinion was that it was a decent action flick and not much else. I only really cared about one character, and this movie has basically confirmed for me that I prefer seeing movies in 2D.

Fully explaining the origin of this comic (image?) requires giving away a minor spoiler for Tron: Legacy. It's not a big one, and it regards the most common "plot hole" complaint I've seen on the interwebs, but this is fair warning all the same.

Everyone who cares about minor spoilers gone?

Okay. The most common complaint I've heard is about the scene when Quorra says they can't be followed. The complaint is that she's claiming the other programs will malfunction if they go off-grid, but that's not what it sounded like to me. It sounded like she was referring to the new light cycle vehicles, meaning those would malfunction off the grid. They couldn't be followed because by the time anyone got to an off-grid vehicle to follow them, they'd be long gone.

It's possible I could be mistaken, but I had heard about this "plot hole" in advance, so I was just waiting for it to come up and I was paying extra attention when it did. My explanation has its own logic flaws, but I do believe that's the movie's official explanation for that scene.

So what does this have to do with bumper cars? Simply put, bumper cars can't go "off-grid", either. They're powered by the arena itself. As such, when I hear Quorra's explanation, the first thing I thought of was bumper cars.

Of course, I'm not sure WHY the light cycles malfunction off-grid. Does the grid power them? Is it a security measure to make sure programs can't escape? Are the light cycles just so poorly designed that they'll blow up on the cyber equivalent of off-road terrain?