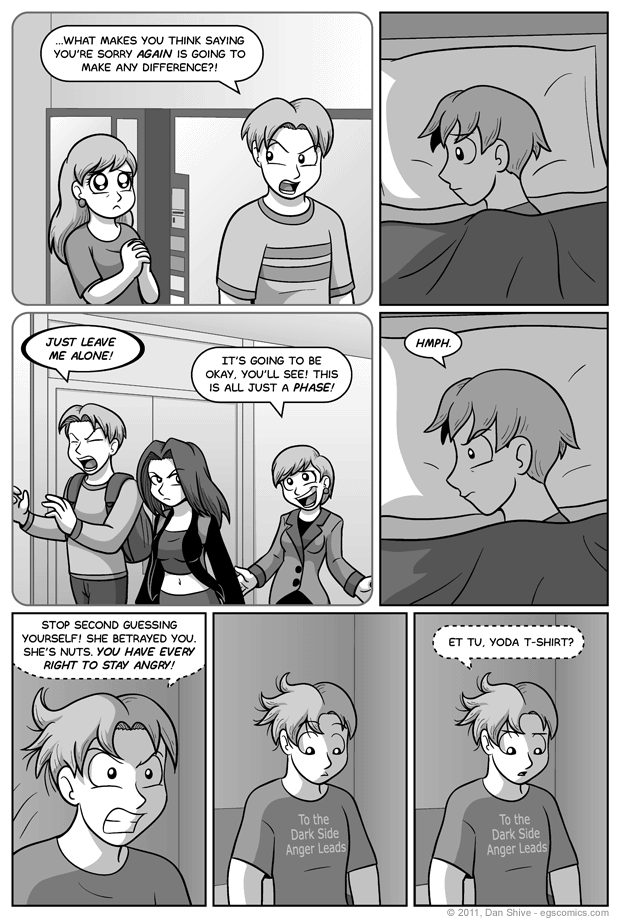 That Yoda quote does not an easy, legible t-shirt design make, and I know this the hard way because I was totally going to just slap that whole quote on Justin's t-shirt. I tried various designs, paraphrasing, etc, but it just didn't work out. I don't know if Yoda has ever actually said "to the dark side, anger leads", but it sounds like something that wordy little bastard would say while keeping the bottom line intact.

...Wait, no, I meant that in a funny way! I'm not seriously calling Yoda a--*inbox explodes due to onslaught of e-mail* Well, that's just great.

In that earlier comic's commentary, I mentioned that one could nitpick the definitive order of fear leading to anger, etc, but it actually does seem to apply somewhat to Justin. Justin discovered something about himself that made him afraid of how people would react, fear made his anger worse when Melissa betrayed his trust, that anger gave way to hate, and it's lead to suffering.

Thinking about it, I was tempted to draw Darth Justin, but then I realized I already did that in the comic I've already linked to here. Of course, that was zoomed out and overhead, so I guess I could justify drawing it again... yeah, I think that's going to have to happen.

Not that Justin's a bad guy, of course. This is just an excuse to draw him in a nifty outfit with a long black cape and glowing laser sword.