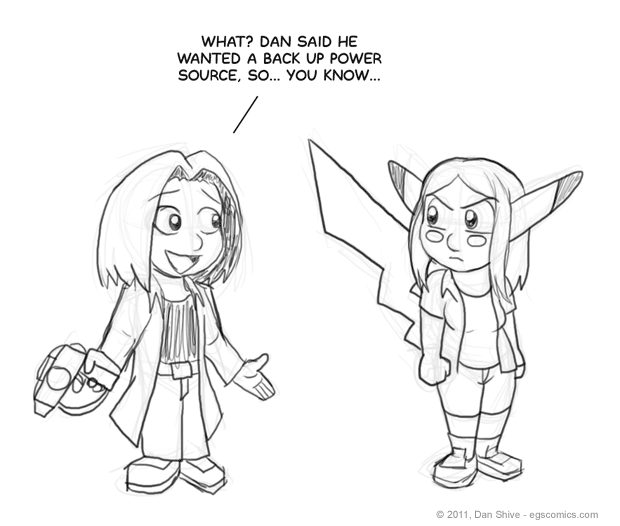 Posted August 4, 2011 at 1:00 am
It happened again, though it wasn't nearly as bad this time. Thunderstorms are once again supposedly to blame.

As for this image, some people on Google+ suggested transforming the people responsible into Pikachus. This pretty much meant I HAD to draw this, as the very first EGS story ever was of Tedd turning Sarah into a half-Pikachu.

I am 100% serious. I'm pretty sure I've talked about it before online, but I'm not sure where, so here we go again.

I drew it in high school before I even had any sort of halfway decent design for Elliot or Grace even existed in any form. I have no idea what happened to it, but the story was that Sarah was accidentally transformed and could only say her name. Probably my favorite comic in the series was Sarah attempting to call in sick to school while only being able to say "Sarah", and somehow almost succeeding. I really wish I knew where those comics are now. That one alone would be worth finding.

Anyway, that's the origin of "the incident". Sarah's transformation went from Pikachu to catgirl because I didn't want Nintendo hunting me down. That, and Sarah gained the power to shoot electricity, and that's beyond the scope of what the modern TF gun can accomplish.

Another fun fact that I'm sure I've mentioned but can't remember where is that I had originally intended for Sarah to wind up with a cat tail. It was something she would have somehow wound up with after turning back to normal, but not wanting to let Tedd do anymore zappy stuff with her, she just decided to nonchalantly keep it. It's slightly sillier than the direction I've taken with the comic, but only just.

Incidentally, this history of Tedd and Sarah pre-online EGS is one of the reasons I'm excited about getting back to this eventually.