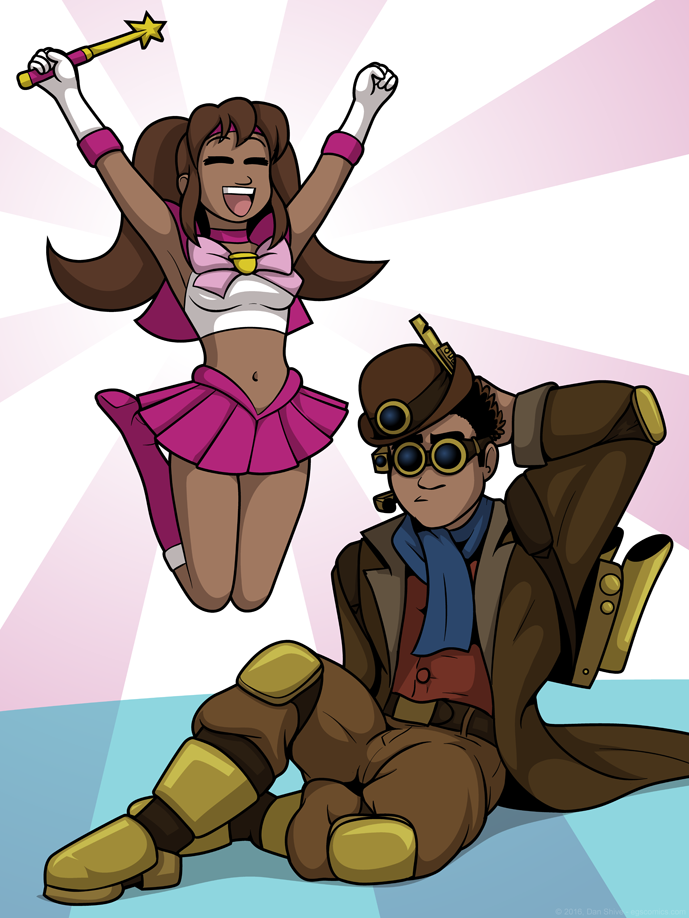 Robert prefers his sketchbooks randomized, and somehow wound up with this. I'm not sure how exactly Grace has defeated Greg, here, or why Greg even needed defeating, but that's beside the point! What actually is the point eludes me, but whatever!

Maybe they were playing video games or something?

I don't know much about steampunk, but I did extensive research, and concluded it involves steam and old-timey clothing, and that was good enough for me. I have no idea what the things Greg is wearing do, but I assume they would baffle modern engineers.

I owe people sketchbooks, and for a time, it was difficult to do them with any sort of regularity while also posting EGS:NP and story comics. Between those and commentaries, to put it bluntly, I burned out horribly.

Since then, I've made pinups (basically somewhat less SFW sketchbooks) a thing over on Patreon, which was easier given that the subject matter of them was almost entirely up to me and could be schemed ahead of time, but even those have been posted pretty darn last minute the past few months.

HOWEVER! With EGS:NP now being written well in advance (all of April has been written, and I'm working on May), and schemes to write ahead with story comics, I'm comfortable bringing back sketchbooks on Tuesdays and Thursdays (and it's about time) at least until all previously earned sketchbooks have been completed. After that, I will assess how I'm feeling, and whether I'm comfortable continuing them on such a schedule in some way.

Note: Requests are (usually) paraphrased for clarity and brevity