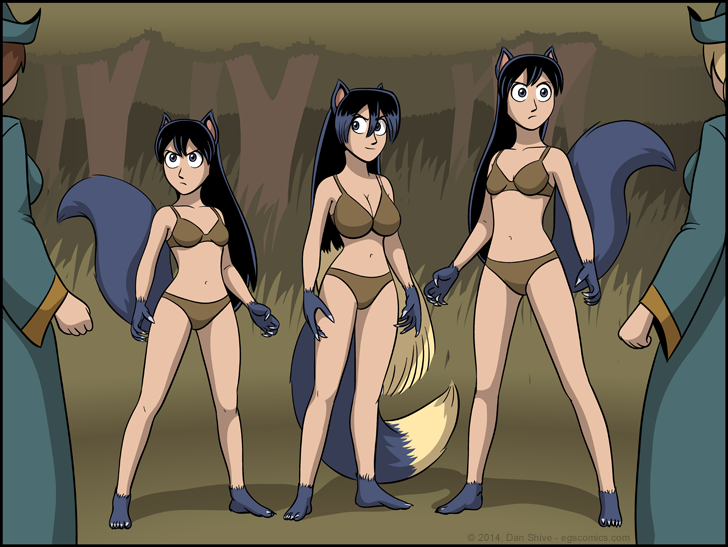 This Milestone sketchbook is actually related to a previous sketchbook with Susan in a bikini. I consider that to be a good sketchbook, but I actually made a mistake with it. The sketchbook is mostly as the patron requested, but I had forgotten about a late revision I had agreed to, which was to have short Susan also be part werewolf in light of it being Halloween.

I completely forgot about that when it came time to actually create the sketchbook, however, and I only realized my mistake later. The patron never said anything about it, but I felt I should do something to make up for it. In addition, people stated that they couldn't tell short Susan was, well, short, due to the lack of anything to compare her height to. In addition to that addition, her pose made it look like her hips weren't proportionately wider than normal Susan.

And so, now there's this sketchbook. Three werewolf Susans in bikinis of varying heights and proportions for contrast. I believe this is apparent, but nonetheless, there's short Susan, V5 Susan (with hair a bit different from normal for fun), and regular Susan (not counting wolfiness).

Like the previous bikini Susan sketchbook (she is SO going to hammer me), I had a goal of not having Susan behave out of character. As such, this is Sarah's imagination, and she's imagining them in bikinis because she's fighting against a water themed deck and they're ready to jump in. The pirates have a more aqua color scheme than they did in the story comics for the sake of contrast with the Susans.

As for how I explain the three of them being different when they're presumably representations of the same card, that's simple really. Short Susan has been enchanted by her opponent with a debuff, lowering her attack and health by 1 each. The middle Susan, meanwhile, has a sort of "lure" enchantment on her, meaning every monster has to block her if she attacks (which would make Sarah think of V5).

So BAM! In character for both Sarah and Susan! Sort of, anyway. Technically speaking, Susan's character isn't actually in question in this scenario.