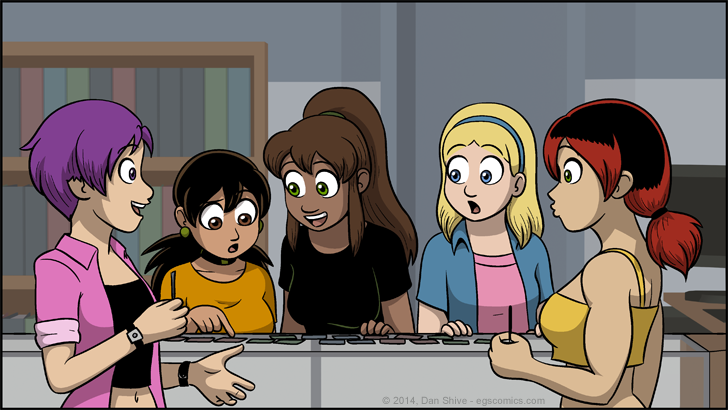 (HEY! This is the second of two sketchbooks today)

Requested by Yakaru - Tedd, Grace, Sarah, Nanase, and Rhoda as Lady Planeswalkers of Moperville, Lady Planeswalkers a group that is for girls (and others) who want to game without the "issues" that have been shown a couple of times in the plot.

My logic for accepting a request that technically isn't specifying forms or outfits is that being part of that group is their form and and that form naturally translates to them organizing cards and chatting about them. Or something. The logic is ROCK SOLID.

This sketchbook might have looked slightly different had I made it earlier in the month. I'm somewhat overdue for a haircut, but I've basically decided not to get one on the basis that winter is coming and I'll be happy to have long hair then. Just today, though, it was sort of hot and muggy around here, and my long(ish) hair wasn't helping matters. When it came time to draw this and given that I'd decided on outfits for warmer weather, I decided to tie all the longer hair back.

Sarah, of course, is doing the "me" thing and not doing anything to keep her hair off her neck while also dressing in layers. High five, Sarah.

Nanase, meanwhile, finally gets to show off her arms in a way that really shows off how beefy they are. She can totally open pickle jars.

And now, SCHEDULE STUFF! I plan for the first October sketcbhook to be Thursday. There isn't going to be a story comic that day due to one-week schedule change, SO YOU'LL JUST HAVE TO REMEMBER. After that, odds are most weekdays will have a sketchbook entry with a couple exceptions.

And since there was no story comic today, COMMENTARY LINKS (five total):