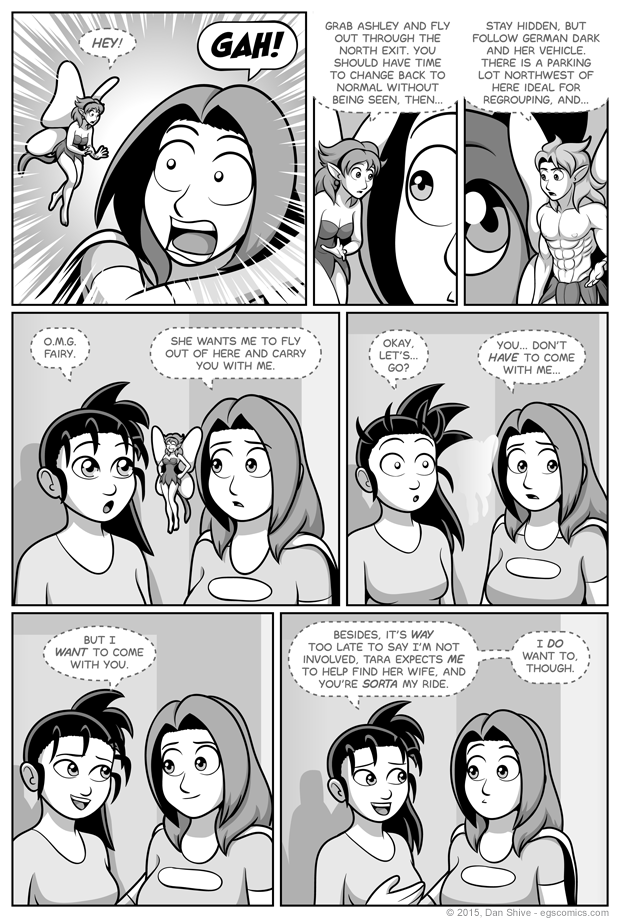 As one may be able to guess by this being a Thursday comic and the next story comic being on a Monday, I ran into script complications. More specifically, "how the heck do I get them to quickly decide on a way out of the mall and then actually do it" complications.

I guess that spoils that the odds of this plan working are 100%, but that shouldn't be terribly surprising. "Those two immortals finally give some advice and it utterly fails" would not be a terribly satisfying twist.

Granted, they weren't always going to give this advice. I had been considering various ways of getting them out of the mall, and simply flying out was complicated by the necessity for Elliot and Ashley to get to Elliot's car without ditching Tara. If nothing else, Ashley would need her coat (Elliot, as least as Cheerleadra, would not), and Elliot literally has to change back if he wants to use his car keys.

That itself isn't terribly complicated, but there was the matter of having to coordinate the plan with Tara, and plan a place to regroup. The amount of discussion required while surrounded by people, especially now, was awkward, and I was trying to think of various ways to do it. I even considered various spells Tara might have to help them escape, and it was getting absurdly convoluted.

Then I remembered I had two immortals lying around who are big on telling mortals what to do and should probably be acknowledged in some way prior to leaving the mall.

It's... It's one of those solutions that's obvious in hindsight...