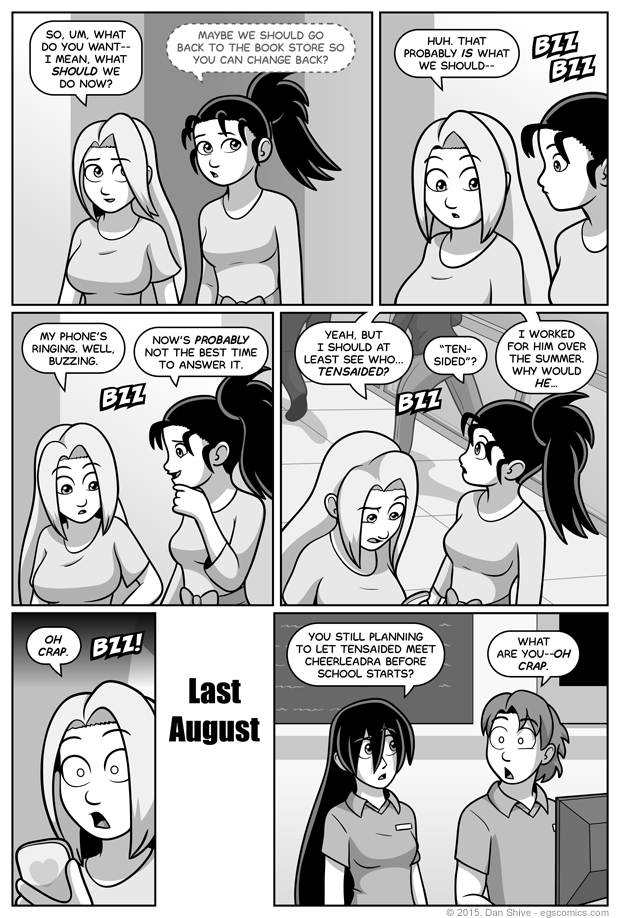 - Rocks Fall, Nobody Is Hired
- For anyone surprised by Susan's hair in this comic
- Noteworthy, and canon, Summer Moment
- Possibly relevant for reasons
- Yes, Elliot still has a phone

NO ONE EXPECTS THE TENSAIDED PHONE CALL!

Okay, someone might have expected the phone to matter at some point given that I called deliberate attention to Elliot still having it earlier, but STILL. On that note, I have not yet BEGUN to pull at dangling plot threads!

I mean, I just did, so I actually have begun, but I'm implying that there will be additional YOU KNOW WHAT I MEAN.

I was originally going to have Elliot's ringtone be the Imperial March from Star Wars, but acknowledging it was clunky, and the "dun-dun-dun dun-DAH-dun", etc, called for a lot of panel space, so I decided it was set to vibrate. Makes sense given that they're on a date in a mall and the vibrating would actually be harder to miss, but it's not quite as fun.

Fun fact: My phone does the Kim Possible beep when I get text messages and it is the best thing ever.

Link to EGS:NP will be posted when it is during the day