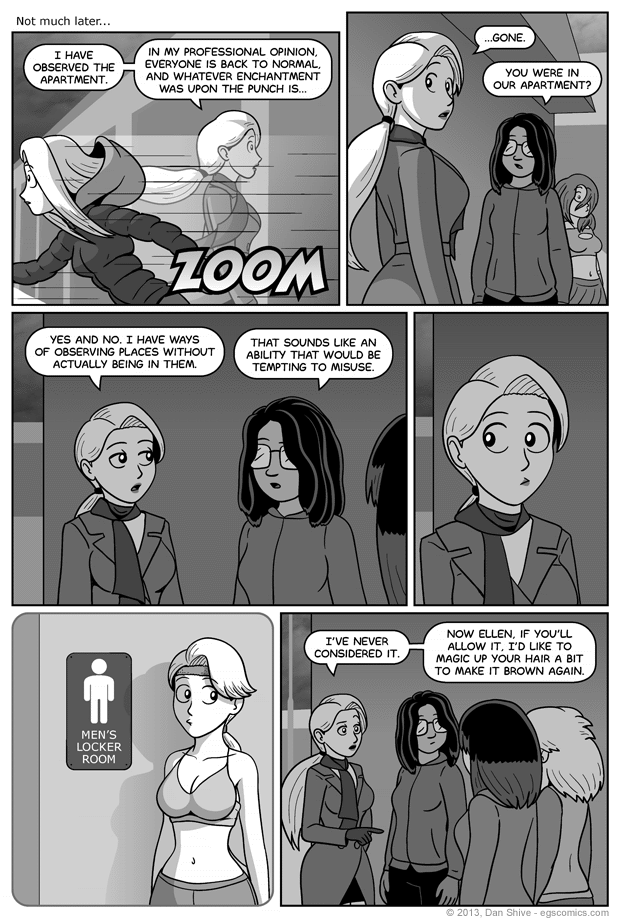 I considered several different ways Cranium could confirm that everyone was okay, including just flying around the windows and pretending to deliver a pizza. Ultimately, I decided she should have some cool, psychic out of body dealie because her last name is Cranium, and that's how logic works.

I began talking about the original idea that eventually evolved into this storyline a couple comic commentaries back, and now it's time to talk about Charlotte (yay).

The initial idea for Charlotte barely resembles modern Charlotte beyond being an aficionado of spooky things. For one thing, she wasn't named Charlotte. I forget what I was going to name her, but the idea to name Charlotte, well, Charlotte came later (and there is a reason. Feel free to try to guess before it's revealed / confirmed).

She was originally less a character with potential for recurring and more just intended as a suspect, which was the original reason for her interest in spooky things. Given a situation where someone else clearly has magic, but they don't know who, I figured a character with an interest in such things would be a logical suspect.

So, of course, she was never going to be guilty. It's never the obvious suspect, right? In any case, she's evolved significantly since then into a character who's pretty much guaranteed to show up again.