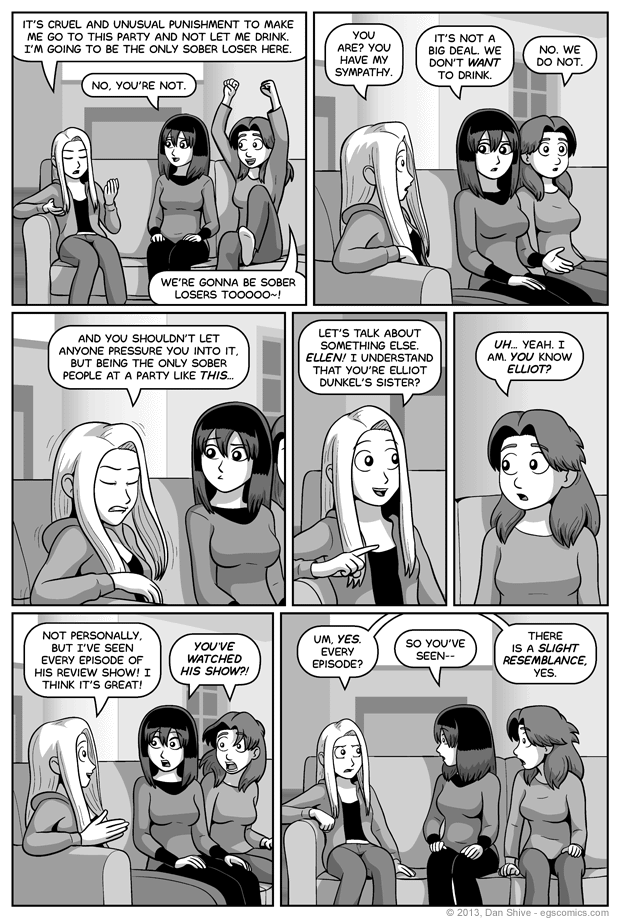 I've likely talked about being the only sober person at a party before, and I will again! Just not yet. A future comic commentary can put up with me going on about that again.

The composition for this comic fell into place for me once I settled on Diane's general posing. I originally had her sitting up straighter with her legs crossed, which was horrible. I mean, it looked okay out of context, but in context it was bad enough to make my future self invent a time machine and travel back in time to stop me.

Incidentally, if the universe implodes, I apologize.

One might notice that Ellen isn't wearing shoes in this comic. This is another topic I may have talked about before, but I'm going to talk about it again (or for the first time; I'm not sure). Removing shoes while inside of a house or apartment seems natural to me. It's the policy of many people I know, it's what I ask of people, and it all feels like "well, yeah, that's just what you do" to me.

This is obviously not the case for some people, however, as I have been contacted by some people who have been confused by the characters always being barefoot or in socks around their homes. It's just how I, and most people I know, roll. I've been to homes where the shoes have stayed on, and it's always felt like I was doing something wrong by leaving my shoes on.