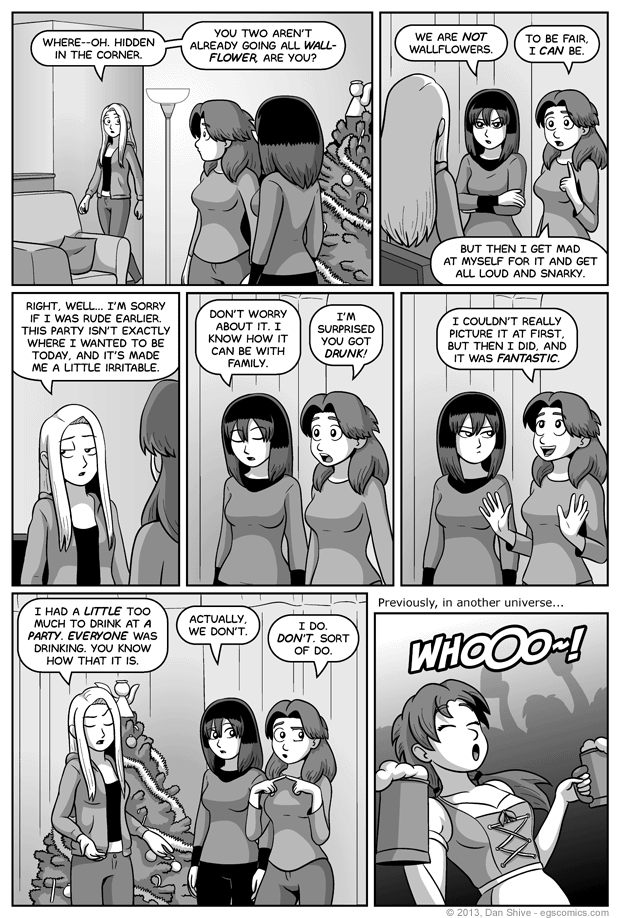 Posted May 22, 2013 at 1:00 am
- Ellen's second life
- Ellen explaining the details at Grace's birthday party
- Ellen sharing more details with Nanase
- Diane got in trouble

Writing for Ellen is a lot like writing for a more worldly female Elliot with worse impulse control and less restraint. Which, of course, should probably be expected.

There are two sofas in the room they're in, but the back of one combined with the other sort of makes it look like there's one very oddly shaped piece of furniture. It's two, I promise you that, but it does look sorta weird in the first panel of this comic. I also assure you that there's a TV behind--er, in front... There's a TV with a varying relative position the direction each character is facing there.

The lamp is based on one I own, and I believe is similar to one or more that my friends owned. I remember once hearing that some people considered such lamps dangerous because some people would haphazardly drape clothing over the top, thereby creating a potential fire hazard. I don't think it's fair, however, to describe the lamp in that scenario as being dangerous. I would save that adjective for whoever thought it was good idea to leave fabric on a hot bulb.