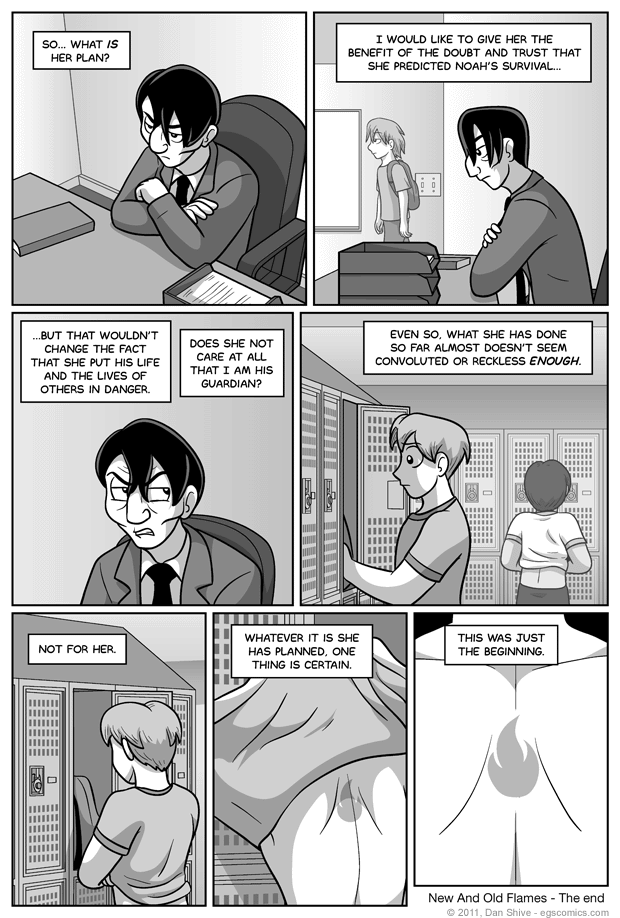 This ending, along with the simple matter of pacing, is why Noah talking with Raven Friday night was done via flashback instead of in actual chronological order.

Speaking of endings, yes! This comic marks the end of New And Old Flames. It is the longest storyline in this comic's history at 150 updates and 151 pages. That's right. The number of pages matches the number of Pokemon in the first games. That there's a lot of pages.

(Incidentally, that technically makes the "since when can you do that" comic Pikachu.)

Coming up next is Q&A #5! I have more than enough questions by now, but what the heck. I haven't made the comics yet and something you ask could still get answered, so if you have a question, feel free. Just keep in mind that I'm going to be avoiding spoilers for future storylines in the Q&A, so questions like "will Grace ever be a duck" won't get answered.

What, you weren't wondering whether she'll ever be a duck? Of course you weren't. I bet you are NOW, though, arent'cha?!

I'm not sure how long the Q&A will last, but I will be writing the script for the first storyline of the next set of comics during it, that next set of comics being titled 9,001% Serious. Will it live up to that title? It's mathematically impossible, so probably not, but we'll ultimately find out together!