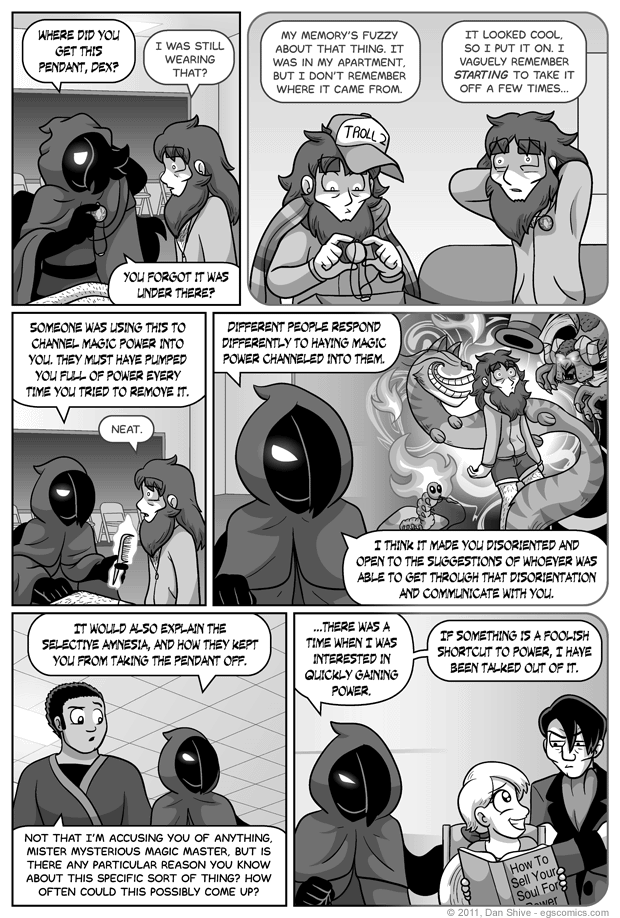 The contents of this comic was almost two comics with more text to say the same amount of stuff and no flashbacks or visualizations instead of three. Say what you will about my editing prowess, but it dodged a bullet Matrix-style on this one.

Troll 2 is a movie I have not seen, but have heard a LOT about. It's a cult classic bad movie beloved for its awfulness. It's so beloved, in fact, that it has its own documentary about it made 19 years after the fact.

I know enough about the movie to know that I would not want to see it, or if I did, probably only once and with a group. This is simply because I am squeamish and know enough about the film and myself to know that I would be too uncomfortable to enjoy it in proper irony. I imagine Dex having his finger directly on the pulse of cult classic horror films, however, which most definitely would include Troll 2.

The pattern's probably off, even in greyscale, but that's intended to be a replica of one of Doctor Who's super long scarves. I intended it to be another example of geek paraphernalia, but if you want to assume it's left over from an undocumented adventure with the Doctor, that's your business. Fandom has done stranger things to Doctor Who.

I think the Alice in Wonderland imagery is pretty straightforward with the possible exception of what's going on the with Taurcanis Draco. I say "possible", because I have no idea how common knowledge the Jabberwocky is. I never really heard anything of substance about it until around the time the Tim Burton film came out.