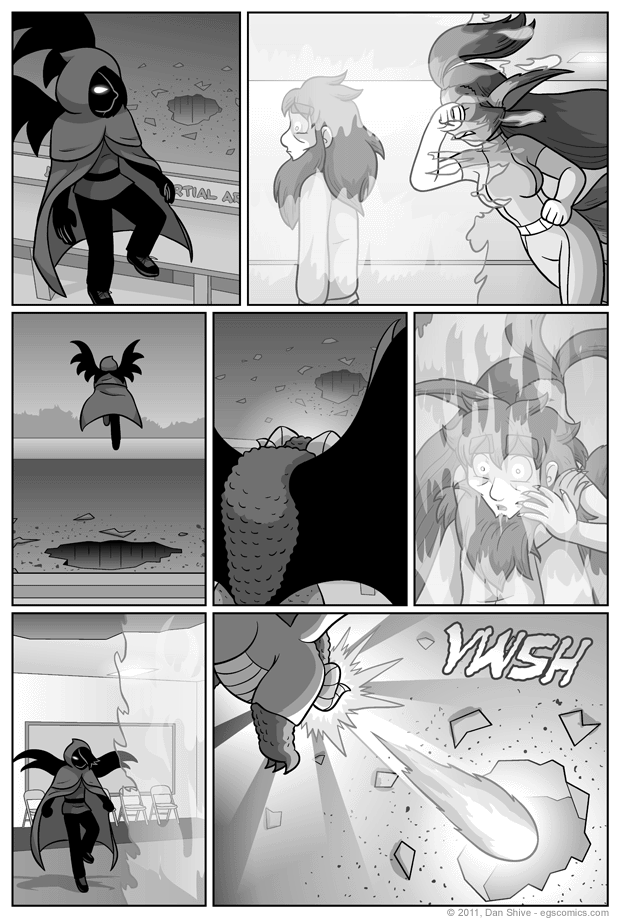 It's possible Dex was referring to something other than an explosive fireball being shot into the dojo in the previous comic. Possible, but not bloody likely.

I might have mentioned this before, but the Taurcanis Draco reminds me of a bat from behind. That figures, given that it basically has bat wings, but there's something about it's bulky, hunched figure that reminds me more of a bat than many other non-bat with bat wings creatures.

There's probably not enough rubble on the roof there. Or maybe there's too much? I'm not an expert on massive holes in roofs. I could try to learn more. All I'd need would be a stepladder, a jackhammer, and a darn good lawyer for after.

Dex's beard and the heat shield effect make it hard to ascertain whether Grace is pulling off the move correctly, but I did research how to do one, and the intent was to have as close to an accurate portrayal of an attempt of one as I can draw. In the original sketch, sans-beard, it's easy to determine whether Grace's arm is pressing up against anything it shouldn't be.

Unfortunately for y'all, Dex DOES have a big, bushy beard, so we'll have to wait and see.

Of course, this has to be said: DO NOT TRY THIS AT HOME. The sleeper hold, flying around, being a dragon, none of it! Remember, we're professionals. We have years of experience that keep us safe. Mostly by virtue of the fact that I'm drawing this stuff instead of actually doing it, but STILL!