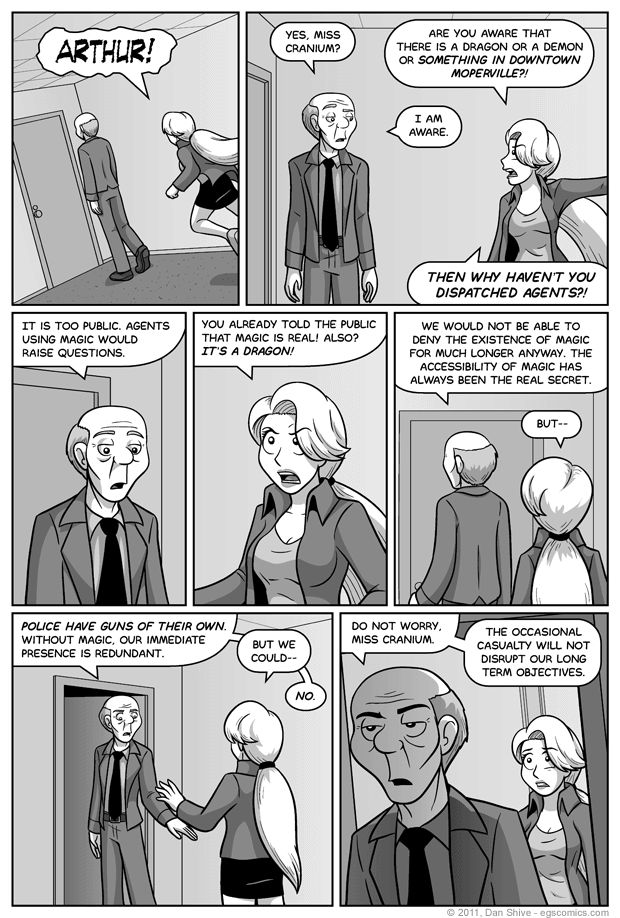 I considered having Arthur kick a puppy and talk loudly during a movie, but I think it's adequately clear that I'm not trying to make him likable. Authorial intent counts for very little, however, so it's entirely possible you might like him just fine. Just keep in mind that I have that puppy on standby and directions to your favorite movie theater.

Agent Cranium's appearance has gotten, from at least my perspective, a major upgrade. This is mostly the result of her hair being similar to Noah's. I wanted to increase the visual distinctiveness between the two, and this is the result. Granted, I think there are at least a couple of other visual cues that Cranium isn't Noah, but I wanted it to be more immediately apparent from her face.

I made a horrible mistake while making this comic, though it had nothing to do with the comic itself. I drank too much caffeine the day I made this comic, and it hurt my productivity. I'm sure the assumption currently being made some of you is that it made me too jittery to draw properly, but that wasn't the issue.

The issue is that when I have too much caffeine, it makes it difficult for me to think straight and concentrate on a given task. The right amount of caffeine helps make me alert and a lot more productive, but too much gives me a headache. Blargh.

Granted, this barely has anything to do with the comic, but I'm hoping that by including it in a commentary, I'll remember this happens the next time I'm thinking of drinking an excessive amount of caffeine.