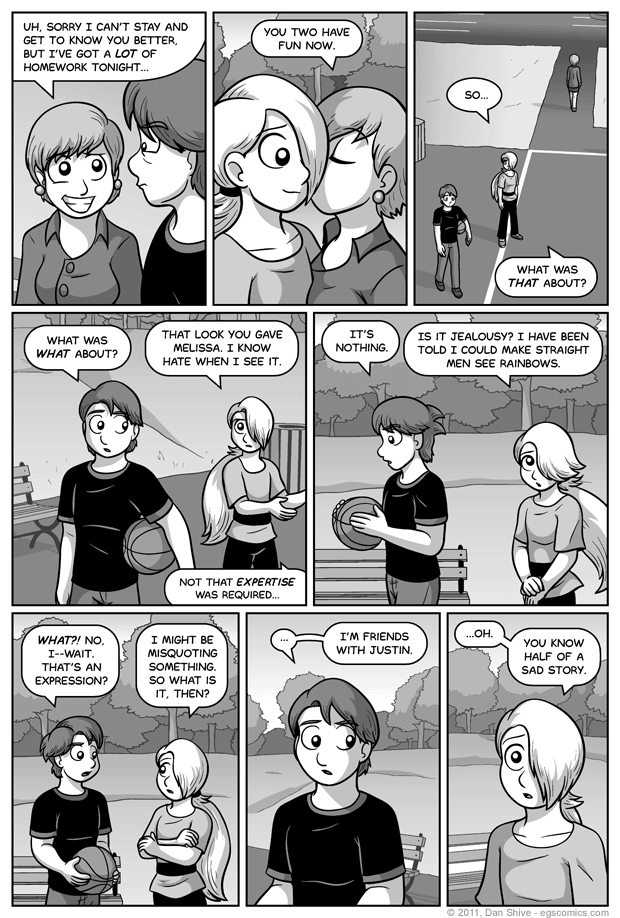 Posted January 26, 2011 at 1:00 am
The fact that this isn't a Friday cliffhanger comic makes me feel like a failure as an evil cartoonist.

Anyway, I've been linking to these comics a lot lately, but what the hell. Here's the "half" we've heard, which is just a little more than Elliot presumably knows. The purely visual summary from when Justin was zapped is here.

Much of the dialogue in panel six basically played out in my mind after having written panel five. I wrote the "make straight men see rainbows" line without thinking much about it or trying to be clever, and then paused. The thought "where the hell did THAT come from" sprung to mind.

I assumed I had to be quoting SOMETHING, so I did an exact (in quotes) Google search and got no results. If it was inspired by something I've heard before and have since forgotten, this must be a paraphrased version of it.

As such, Noah's "I might be misquoting something" line in panel six is 100% sincere. If it turns out I did coin this phrase, then it's origin was some sort of bizarre epiphany.

In any case, while the phrasing might be new, the concept is not.

Back when I first foreshadowed a scene with Elliot and Noah discussing Melissa, I actually pictured Melissa at no point being present before, during or after the discussion.

By the time we'd reached this point, however, I had thought of several reasons why she should be present, even if just briefly. For one thing, it dawned on me that while Melissa's actual presence during the discussion wouldn't work, she was basically being treated like Maris from Frasier, a character often referenced but never seen.

This presented a slight complication for writing this comic, as I wanted her to depart pretty quickly. It's a bit awkward, but given Elliot's reaction to her, I feel that's pretty genuine. Besides, when the hell any of these characters get homework done is is a pretty consistent plot hole and it's nice to see SOMEONE try to fill it.