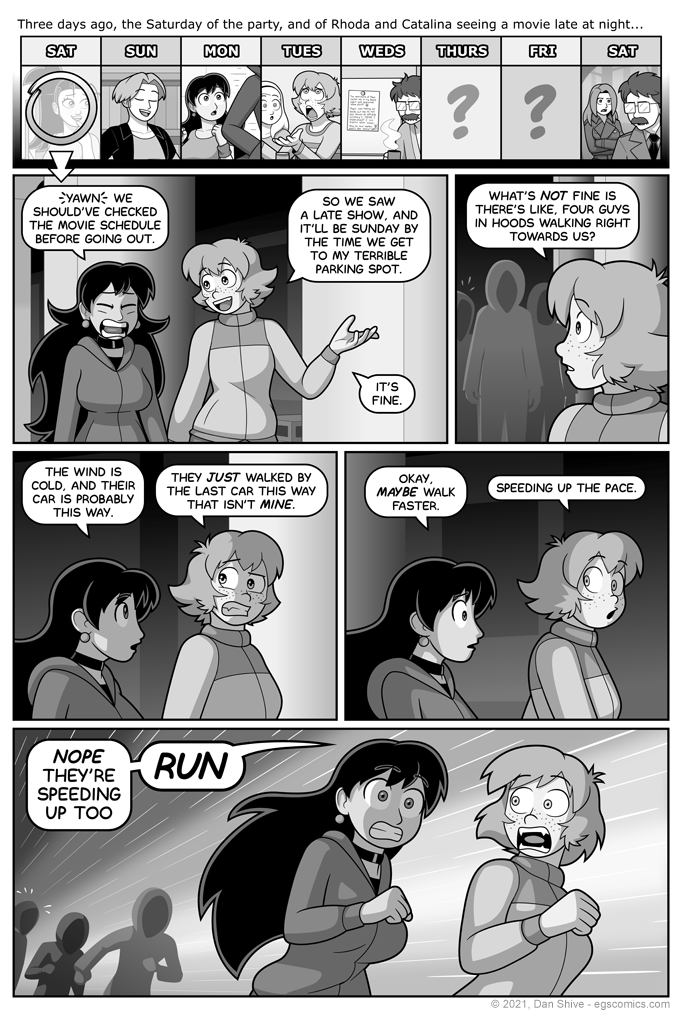 I'm sorry this wound up being a Friday comic! Granted, it works much better as a "Friday" comic than a "Wednesday" comic, but a missed day is still a missed day.

I hope people find the revised timeline useful! An image for Sunday was added, and Monday / Tuesday were changed to contextually relevant things (the first timeline showed Fox folding laundry for Monday, and Elliot talking to Tedd and Grace for Tuesday).

If I ever saw a late movie at the theaters, it was most likely a result of a friend's planning (or lack thereof). I've definitely been in "welp, this was poorly planned, how are we going to kill two hours" situations.

An exception to this was Transformers 3, which I normally wouldn't have enjoyed, but I saw it during a very hot summer when my home's power was out for several days. A ridiculous movie in an air-conditioned theater? Yes please.

As much as I wanted these guys to be wearing hoods for ye olde deliberate identity concealment reasons, I didn't want to imply "oh no, they're wearing hoods, they are automatically bad", either. I definitely wanted to point out that hoods have a perfectly innocent function, darn it.

That's not why Rhoda is wearing a hooded sweatshirt, it's just something she's worn before. In retrospect, however, I am particularly happy with the choice in clothing.

Granted, I've NO idea how she manages to fit all that hair under that hood.

Note to self: Draw Rhoda with that hood up sometime.